Am I being silly when I say I am concerned about the trend towards giving cats and dogs Prozac? I mean Prozac wasn't heard of until fairly recently and now it seems almost as if it is a mainstream way of treating a cat or dog with "behavioral problems". Are these cat problems or are they our problems? Is behavior that is unacceptable to us due to something that we are doing or is the cause due to "mental illness" in the cat. Is this being checked out before the drug is prescribed? Forgive me for questioning or being a bit unbelieving but this smacks a bit of the veterinarian easy money packaged treatment syndrome along the lines of if your cat comes for a vaccination we will neuter and declaw at the same time for a nice discount.

If the cat is behaving crazy by our standards, give it some Prozac, quieten it down, make it more pliable, content and accepting - is that the way it is? Is this the right way to go? Is this an easy route for us and a commercial route for the vets, or is this a genuinely good thing for cats and dogs? Apparently 8% of dogs suffer from canine compulsive disorder.

For dogs it will be used to treat a canine compulsive disorder in which "faulty genes" and stress combine resulting in excessive licking, whimpering and tail chasing. There are feline equivalents such as feline hyperesthesia

The drug for dogs is called "Reconcile" and it comes in the form of a chewy beef flavoured tidbit. Trials of "mentally disturbed" pets resulted in improvements after eight weeks. The drug maker, Eli Lilly has been granted a license by Britain's Veterinary Medicines Directorate.

The big problem is this. Drug manufacturers are in big business. In my opinion, they can or they tend to create new markets by creating illnesses out of normal characteristics albeit unwelcome ones, or what appears to be strange behavior. In short the administering of dog or cat Prozac is promoted by big business. Is that the platform upon which veterinarians acting independently should diagnose and treat? The other problem is that often veterinarians are looking to make more money as well. They are, after all, in business too.

Dr. Steven Melman, of the Animal Dermatology and Behavior Clinic in Maryland says that it can be given for depressed cats. He also says that he treats cats for obsessive compulsive disorders with Prozac. I wonder if these people are looking into the cause of obsessive compulsive disorders, thoroughly, before prescribing it. I suppose they are but it seems to me that the harder but better course of action is to physically remove the cause if that is possible. Is there research on this? 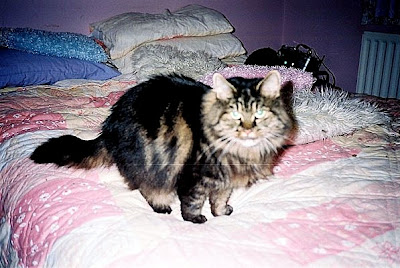 Prozac (immediately above) lives with other 15 cats. She's called Prozac simply because she's not quite the full shilling after a litter of kittens died in her womb and she had to have emergency surgery. Ahh..I am sad for her. Are there any other cats called Prozac out there?!

Back to more serious stuff..in a case of cat being bullied (by other cats), reported in the Daily Mail (30-1-2007), Prozac was prescribed with success. Perhaps Prozac can be useful.

When the patient cannot talk and express themselves to aid diagnosis and where there is financial profit and expediency in prescribing an easy fix such a cat Prozac, I fear it may be over prescribed to the detriment of the patient - our cats.