I received a bit of a lesson from my veterinarian the other day and I am pleased about it. It is a simple lesson about cat self-mutilation which is not an uncommon cat health problem. By “self-mutilation” I mean overgrooming to the point where the fur is lost and the skin quite possibly damaged and scratching the skin and often the ears to the point where the skin is broken and it bleeds. 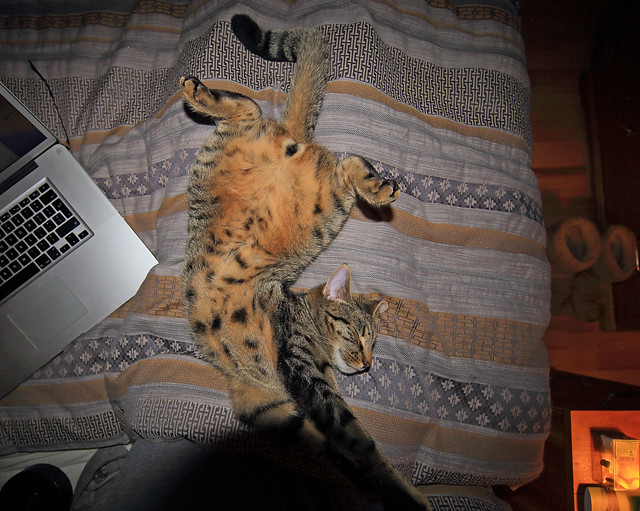 Months ago my cat Gabriel developed a small skin defect near his left ear. It was a polyp: a small strand of skin sticking up with a ball on top: very odd. A believe they are called “skin tags”.

I believe that it irritated him and he scratched the area and inside his left ear. It was not that bad. The amount of scratching was almost at a normal level so it was hard to tell if there was a problem. However, over time he scratched enough to break the skin inside the ear in three places an the area of the polyp was scratched to the point where it bleed slightly.

At one time I though he might have skin cancer. I took him to my vet. The general diagnosis hinged around “cause and effect”. What the vet meant was he was undecided if there was a cause for his scratching or whether his scratching was the cause of further scratching.

In order to break the cycle if it existed and at the same time test if there was an underlying cause of an itchy skin, my vet gave him an antihistamine injection. This stopped the itching and stopped the scratching. The skin where the polyp was situated has healed and he is not scratching and self-mutilating his ears.

Although the final diagnosis is yet to be made, it appears that Gabriel had a bit of an itch possibly caused by the skin polyp but he started a cycle of scratching causing an itchy skin and so on. The initial cause had gone but he perpetuated the itch by scratching himself. At the moment the antihistamine appears to have been successful.

Lesson: cats can be the authors of their own itchiness!