This is a very rare example of a cat stuck up a tree who dies after six days and is then taken away by a vulture. That is what the people who were involved in the rescue believe happened. All the rescues sadly failed. It is said that this was a young cat.

All the stories about cats stuck in trees that I have read have ended successfully. Until now I have never heard of a cat dying in a tree.

The location is Boyes Hot Springs in Sonoma County, USA. The cat was stuck more than 50 feet up a redwood tree. He cried incessantly.

A lady who lives on the road where the tree is situated posted information about the cat on a neighborhood website and there was a good response with many suggestions. As it happens no one could help.

The Sonoma Valley Fire and Rescue Authority were unable to help because there are powerlines next to the tree.

In the end two brave local residents who had experience in tree climbing tried to rescue the cat.

The first was Roy Tennant. He used climbing equipment to get to 50 feet up at which point he turned back because the tree trunk was too thin and the ascent was becoming too dangerous. Also he could not see or hear the cat.

Next to try was another local, Steve Millosovich. His wife is a committed animal rescuer. Steve has good experience of climbing trees because he had worked as a tree surgeon (arborist).

He tried until dark to reach the cat. He got to within a few feet and attempted to tempt the cat with turkey but at this point the tree trunk was thin and the cat became frightened and climbed higher.

On Jan 2nd the cat was still crying but when dawn arrived the next day there was silence while a vulture was perched on a nearby power line.

No one saw the vulture take the cat. It has been presumed to have happened. The cat was stuck for six days without food or water. Cats are great survivors and it is not clear is this cat died of lack of water. There are stories of cats going without water for longer and surviving. Cats trapped in containers for a month have survived but it is believed that these cats have licked condensation from the insides of the container.

I suppose it is possible the cat became weak and the vulture took him away – very sad ending. It confirms to me that people are correct to try and rescue cats stuck in trees rather than waiting for the cat to come dowm of his own accord. It is peculiar that the domestic cat is able to misjudge his climbing ability to such devastating effect. You’d think the cat would instinctively kown his limits. 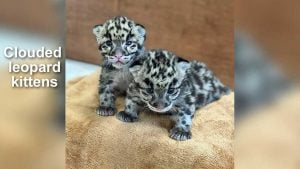