Cat tarot? What is that? People also search for “cat tarot cards”, “the white cat tarot” and “black cat tarot” and more; all of which revolve around tarot cards with cats on them including one deck that shows mystical “archetypes” with their cats. The word “archetype” is a word used in psychiatry but for the life of me I cannot understand it!

Anyway, this got me thinking. First what does it all mean and secondly could I make some cat tarot cards and start doing tarot readings for cat lovers using cat tarot cards? How good would that be if you believed in tarot?

Tarot, I learned is pronounced with a silent “t”. By the way, a good site that contains information about Tarot is: Ivy Rose (new window). Before you disappear to that site, I would like to talk a bit about tarot cards with cats on them! And before that a bit about tarot itself.

My thoughts about tarot are somewhat simplistic and naive. Although tarot cards have been used since the 15th century as playing cards; in the modern world, since the latter part of the 18th century, they have evolved and found a role that goes far further namely as a means to acquire an insight into a person's past, current and future life. In short they are usually used to divine the future and understand a bit about ourselves.

The word “divine” means to to foretell; to predict; to presage. Tarot can be used by an individual as an aid in self-understanding and as a route to a better and more successful life by taping into unrealized potential – exciting and interesting stuff. Although you have got to believe in it, obviously. Perhaps the better starting point is to simply keep the mind open to possibilities.

Self help books and courses have taken off in the last twenty years as the world becomes more and more complicated and less and less spiritual. People are seeking something more, something that has meaning. Tarot may help in this quest.

There are usually 78 tarot cards. What is interesting is that there are many different decks. A deck is a complete set of cards. Each card has a picture on it. The pictures are symbolic and rather mystical. They are interpreted by the person reading them on behalf of the client who is undergoing a tarot card reading.

The fact that there are many different versions of the tarot card deck indicates, I think, that there is a great deal of flexibility and subjectivity in the reading and interpretation of tarot cards. Some decks will be more suited to some situations and/or readers of the cards.

Well, last Sunday evening, a friend who knows tarot well, gave me a little demonstration in a central London restaurant in Covent Garden on Halloween! Spooky stuff. There were hundreds of thousands of people in central London dressed up in Halloween outfits.

The basic starting point is to place three cards face down on the table representing the past, present and future. There are a number of variations to the start, some more elaborate, including many more cards, allowing for a more detailed reading.

The reader turned over each card and interpreted them. Astonishingly, the first card (the past) contained an image of a lion! Good start, I thought! It is nice to have a lion represent my past…That may represent my time studying for and becoming a solicitor when I was in my 40s. It was hard and needed a lot of effort. Let’s say it tested me and made me a different person. The qualities of a lion are very suitable in the litigious legal world in which worked. I won’t bore you with the rest but it was fun..and optimistic. Was that optimism born out of a desire by my friend to be nice to me? I am not sure but the cards themselves were optimistic. It wasn’t just about subjective interpretation.

What about cat people cards? This is one of a good number of tarot card decks. I am able to show a couple of cards from this deck under a creative commons license from Flickr: 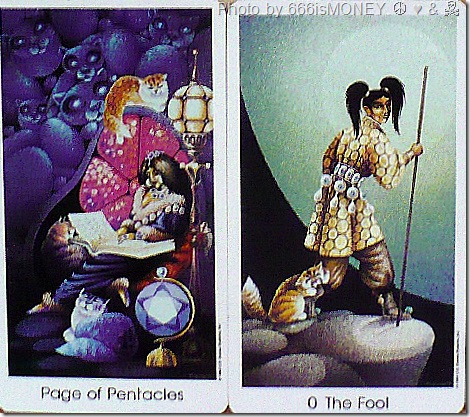 Showing these cards gives me the chance to discuss, very briefly, their underlying meaning. The Fool is the spirit in search of experience. He represents the mystical cleverness bereft of reason within us. The childlike ability to tune into the inner workings of the world. The Page of Pentacles represents the ability to enjoy studying and the passion to create new things. Cat people tarot cards are suitable for idealists and dreamers, it is said.

You can buy a book about cat tarot with a tarot cat people deck of cards on Amazon.com and co.uk:

I hope you enjoyed this little ramble through a mystical landscape.

From Cat Tarot to PoC Forum