My cat, Bigfoot, has been to emergency with urinary problems. Bigfoot woke me up much earlier than usual this morning, begging to go out, fussing like mad. He was acting very odd. It was a puzzle, until an hour later, I went looking for him upstairs where he had zoomed and he was squatting on my sweater drying rack that had a freshly washed wool sweater. His pose was as if he was peeing. 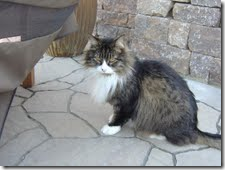 Well, he was! At least, he was trying. His box was clean, except for one big clump…so I knew it was something more than fuss over a dirty box (which I learned here on PoC could be a reason for a cat urinating in places other than the box).

I followed him around, and he continued fussing and squatting every five minutes. Then I saw a drop of blood. I went straight to my friend Google, then to the garage for the carrier. Off to the very expensive 24 hour vet we went. Bigfoot was freaking out the whole time. My heart was breaking.

Well, many hours and $500.00 later, he’s home and we took a nap together. He slept on my head, purring the whole time. I think he is grateful.

He had crystals in his urine. The worry was potential danger of blockage.I guess it happens to male cats. The vet palpated his bladder with me there, and said it wasn’t blocked, but the drops of blood coming out were indicative of a problem. The doctor wasn’t Bigfoot’s regular doc. It was the emergency room for pets. I liked this guy. He used to work for a zoo. We had a long conversation about cat food. I groaned when he said I should switch Bigfoot to Hills C/D. I gave him my long litany about the big Hills hype, and my suspicions based on problems my dog has had with it, and he gave me an earful, and even though I was woozy from little sleep, it was an interesting perspective. 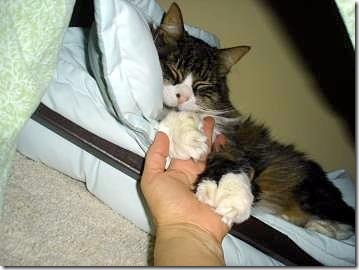 Bigfoot resting after his ordeal

He claims that Hills has spent the money on research, where others haven’t. He regaled me with stories of animal-food nightmares at the zoo. Where he would commission smaller ‘boutique’ food producers, and ended up with more trouble than not. He likens some of the small ‘boutique’ domestic pet food producers in the same category. He said that more than once, there was a small batch error in the food production and as an example, 15 hummingbirds died at once. Kind of a horror story really.

He said he feels very strongly that the Hills Company has done the research, and that cats do well on the C/D. I came home while they worked on Bigfoot, and started asking around. I have a friend who is a vet tech. She said that her cat of 20 years was on C/D for 18 of those years, and her mother’s cat also lived into his 20’s eating C/D.

Since Bigfoot refuses anything wet, including fish – I feel stuck between a rock and hard place. I’ve tried everything with him, almost to the point of caviar. Beluga! He wants none of it. What is an owner to do?

Meanwhile, I have three medications to give to Bigfoot over the course of the week. One med is a small pill, the other two in liquid form. I worry about the antibiotic because of another incident I’ll tell in another story about when Bigfoot got his teeth cleaned last month.

I would go to any length for the little guy. He chose me when he was homeless, and now it is my full responsibility to see him have the healthiest, safest life possible.

Another interesting note; the vet thinks Bigfoot could be nine years old. He’s “long in the tooth” as he put it. He’s the only person who had ventured a guess. I think he may be right. I always thought he was an older fellow, set in his ways.

Does anyone know about aging a cat? Michael? Any stories?

From Bigfoot has cat urinary problems to cat health problems