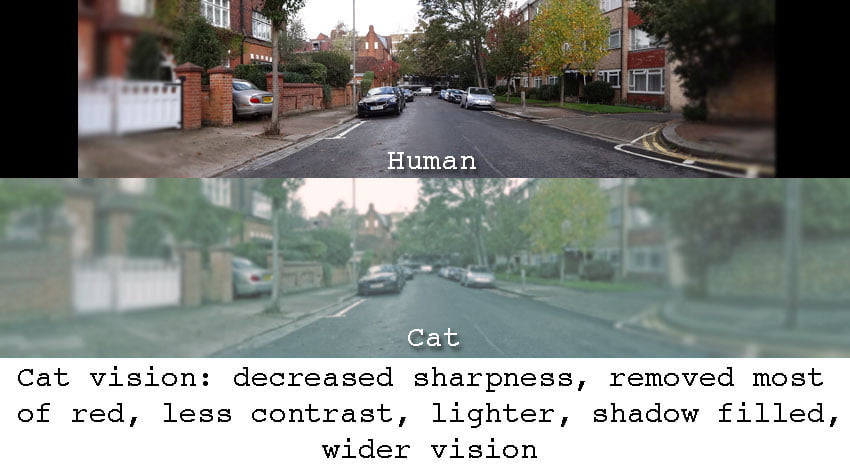 The pictures show comparisons between cat and human vision. They show what a cat sees compared to what people see. This is speculative. It is guesswork based on what scientists have decided. We will never know for sure.

The interesting point about trying to show what a cat sees is that we don’t know how the cat’s brain processes the information that the eye sends it. We are mainly focusing on the structure of the eye including the light sensitive cells in the retina. It is generally agreed today that the cat does not register reds or colors akin to red. For that reason daytime cat vision should be bluish. However, the cat’s brain probably processes the bluish caste out leaving the image neutral, which is what I did.


The pictures are based on the following differences:

Cats eyes are designed to pick up movement in low light conditions because they mainly hunt at dusk and dawn, resulting in light sensitive eyes but eyes that focus less well (less sharp) and which register colour less well. Cats see “blue and yellow colors, but not red, orange or brown”2. In a previous post on this subject I stated that cats were “red color blind or perhaps red-greed color blind”, which, however, is more or less the same thing. However people are not sure how good a cat’s color vision is. In the past experts have stated that cats were colorblind.

A cat’s eyes are much larger than ours relative to head size, and have better peripheral vision because they are more forward in the head than ours. Cats see 200 degrees compared to the 180 degrees of people. Although a simple test confirms that at the outer reaches of peripheral human vision it is next to useless. I would suggest that human peripheral vision is nearer 120-160 degrees. One source1 says 120º. Let’s just say that cats have more peripheral vision and leave it at that.

Some more on peripheral vision:

Of course both for cats and humans, the peripheral part of our vision is blurred. Apparently, a cat’s eyes are more deeply recessed but I am not sure about that. Cats also have less good vision at a distance.

To summarise in plain language: