↓
Home→Readers Forum→Cat wrongfully labeled feral: ‘I kept looking for this vicious wild cat that had terrorized a family’
ShareTweetPinterestWeibo
RedditWhatsapp

This is what gets animals killed. Labeling them feral without any idea of what that really means. This beautiful boy was called in as a feral public nuisance, terrorizing a neighborhood. 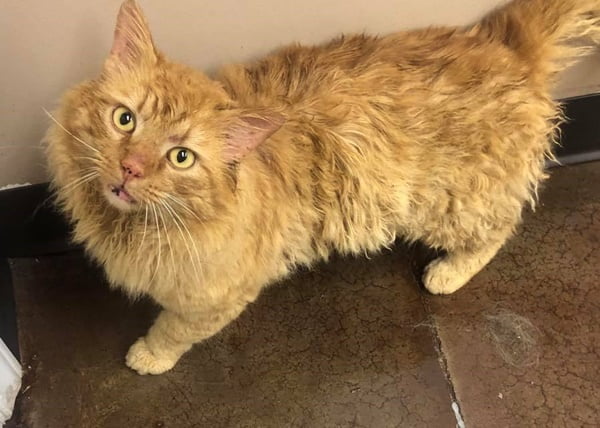 As if we weren’t already busy enough, a call came in yesterday from someone who said they had trapped a nuisance, a feral, who had impregnated their female cats.

They claimed he hung around for food but was a wild cat with a penchant for spraying their barn and upsetting their life. We offered to have him neutered /relocated to a farm. We got another call later that the husband had trumped all plans and told me this wild cat was going to animal control in the trap he’d been in since the day before. Said the cat had been a nuisance and wasn’t welcome.

The man could’ve cared less about the cats fate. I tried hard to change his mind and gave him the euthanasia rates in North Carolina and what could happen. He was unimpressed. I hung up on him.

I called the shelter /told them to please not use county resources to euthanize, I’d come to get this feral and figure it out. They told me they had rules and had to follow them. I understood my hands were tied. I left my phone number with AC /told them I’d be completely accountable to them and They could verify any vetting or place I would take him just to spare his life.

I was feeling so helpless/emotional. I’m tired of all this killing. To my surprise, two hours later, Animal Control called me to tell me this “ feral” had made it in to intake. Was no feral at all. He was quite friendly and sweet. They said “come now if you want him. He’s no feral. He’s letting us pet him.”

I took him today to the vet. He’s got a massive ear infection and cuts under the skin from life’s journeys. Nothing feral about him. The vet said he was a young youthful boy of two. Maybe younger. He purred the whole time and rolled over for belly rubs.

I kept looking for this vicious wild cat that had terrorized a family. This vicious animal that had been a plague of some sort. He turned out to be a loving sweet lap cat who seemed scared of his own shadow. People should be educated on what feral really means.

This one is no wild animal and he’s actually one of the most well behaved. I don’t get it. I guess people just don’t care sometimes and use the word ‘Feral’ to trigger a reaction. A possible lethal one.

Wouldn’t it have been a tragedy if the folks at AC had taken this mans word for truth? Thank God they saw what we saw. I don’t know how we keep failing these cats.

Someone’s going to love this fella!!!!!! He’s huge!!! And super sweet!! Getting neutered in the a.m. His name is Sebastian. Not feral. Not wild. Just a sweet fella who got mixed up with the wrong people. Thank goodness he’s here and alive.

Laura Morrison is a North Carolina champion for the unwanted cats. She’s the founder of Zach’s Rescue and works around the clock to save as many lives as possible.

I wanted to post her story because many, many cats are labeled as feral at intake when in reality they’re scared. This is why it’s important to microchip your cat and should it become lost to request a walk-through at your local shelter. Ferals are most often kept separate from the tame cats.

Click here for more articles in the Reader’s Forum series.