This article and the one that follows on Satanic cults and cats are very in depth concerning Wiccans and Witches and the differences between the three. Hopefully my readers will find it educational. Hopefully it will clear up the mystery and misconceptions between the three. A common misconception is all belong in the same category but the subject is more complex than most give it credit for. (see Part 1 here: Cats as Familiars)

Familiar (noun): a spirit often embodied in an animal and held to attend and serve or guard a person.

It can be any animal or anything containing live energy such as a plant. They are most commonly a cat, dog, toad, owl or mouse.

The familiar will be referred to as a cat for the remainder of this article. Here I have gathered information as a reference for further research for those interested. I cannot verify everything in this article is correct. I am not a Wiccan, a witch nor do I worship Satan. These are three very different sects who make up a part of society in the United States and I believe in the end one part or another affects cats.

All three use cats in their ceremonies. The old age spelling of Magick is used here because that is the way it is spelled to serious researchers of the occult.

This article was originally planned to discuss all three together and had to be broken down into two topics. I did this because the information is too important to worry with word count maximums. Here I will discuss Wiccans and Witches in general. A link to the Satanic cults will be tied into this story at some point.

CATS AS FAMILIARS AND WICCANS

Wicca (noun): a Neopagan religion and a form of modern witchcraft which began in the early part of the 20th century and officially recognized as a religion in the 1950's.

The subject goes much deeper than casting love spells. Their beliefs include a love of nature and deep spirituality-both in themselves and in all they encounter. They respect those with wisdom and leadership ability. Their goal is to reach the highest level of self knowledge without harming others or nature. They do not practice black magick or worship the devil or God. Most are vegetarians. Wicca is a recognized religion began by Gerald Gardner during the 1950's and more of its history can be found at Reference 2

It is the norm to recognize all Wiccans as witches but not all witches are Wiccans. More information on this can be found at Reference 3

. I don't intentionally intend any misuse of these two very similar yet different beliefs and practices. I'm just making an attempt to explain the differences as well as the similarities without anyone getting mad at me.

If I have placed cats as familiars information into one sect and it belongs more to another again I apologize. There are only 2 things I'm trying to express. Wiccans and witches love cats. Satanists don't and sacrifice them.

Most of my research on this subject is in agreement with each other and therefore overlapping. Because of this I list some of my references at the point in the article where they occur and others at the end.

Both Wiccans and witches have an intense love of nature, spirituality and search for inner peace and knowledge. This is why many have chosen cats as familiars. What other animal could be more perfect? Having a cat inside the magick circle improves the mood of the witch by reducing negative energy. The cat is also used in divination, locating lost objects, diagnosing the sick and warning the witch to any unseen entities. It has special magick bestowed upon it and can help the witch with the energy needed for spell casting. Cats can come and go outside the witches circle without disrupting the energy.

Unlike the history of non pagan religions (mainly Christianity), Wiccans do not consider the cat as a low level demon or spirit. The cat is usually a pet attuned to the witch thru a spiritual bond. Some do not like to call a familiar a "pet" as this can be disrespectful to the cat. The cat is performing an essential part of the magick and works on a voluntary basis as it can go where people cannot.

A witch's cat serves only its master. In most cases the cat picks the witch-not the other way around. A cat can feel the energy sent out by the witch and is in tune to the one person who needs it. Most research shows the witch can only have one familiar at one time. She may have several cats but only one will have that special quality. This cat will stay with the witch it's entire life. Witches believe if the cat just up and walks away it wasn't a familiar because the relationship between the two is a life long bond. Some speculate that the familiar only stays as long as needed and then goes on its way. I personally argue there is never a time when a person doesn't need the comfort of a cat. If the witch should die first the cat will walk away and find someone else in need of it's services. Again I believe a cat and witch form an eternal bond between the two. Should the cat die first the witch may dream of it for years. Even death cannot part them. 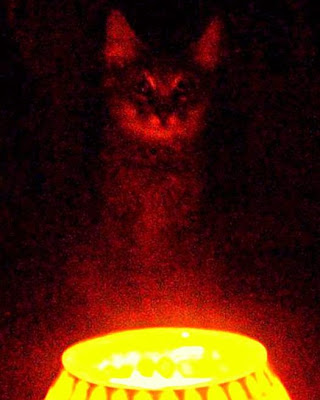 CATS AS FAMILIARS AND WITCHES

There are major differences between the familiar serving a witch who practices magic and the cat that serves a Wiccan. Just as there are many types of witches including fairy, hedge and kitchen. White Witches are believed to practice good magick to benefit others while Black Magic is performed to harm another. Most witches believe in the power of three-fold. Anything done will come back on you three times. Cats are used by both to assist with their spells.

Many involved state that neither calling oneself a witch nor heredity alone can make one a witch. Others claim their knowledge of the craft was handed down from generation to generation but it has to be earned and not simply granted by blood. It may take years of practice to become witch and there is no diploma or degree awarded for passing a witch test.

A major difference between Wiccans and witches is the recognition of God. Wiccans do not believe in God or Satan as separate entities while witches are more solitary in practice and don't have a step by step ceremony that is common in Wiccan ceremonies. Most practice either alone or in a small coven. A witch can be a man or a woman and can belong to another religion. There are even Christians who practice witchcraft on the side.

One point that caught my attention was on a "dark" witch was rather disturbing. One reference stated if a dark witch should lose a familiar that witch cannot memorize any spells until the animal is found. Should the familiar be found dead the dark witch can ask the demonic forces for an immediate replacement. These are the witches who have earned cats a bad name. They believe the cat was sent by Satan and/or is occupied by a demon. Therefore they are entitled to an immediate replacement. They also use the cat to practice dark magick to harm others. Witches also love their cats. For more on the history of the dark witch check out Reference 4

About 20 years ago I knew a dark witch and I have known people in the past who take part in their rituals. I was even invited to a ritual. That will never happen. Let's just say I fully believe in their power because I have witnessed it by a cult member who held a very ordinary job. One member who worked for the same organization I worked for was written up for a routine violation of company policy. The supervisor was involved in a wreck before getting out of the parking lot. The employee I worked with smiled when I asked her if she was responsible for the accident. Coincidence or not?

I don't know any dark witches who use cats as familiars and it's not a subject to casually ask around about. In light of this let me say I will never knowingly have anything to do with them. As long as they stay away from me and me stay away from them we'll all be fine.

Unless they mess with my cat

Cats and Familiars Part 2: Wiccans and Witches to Cat Facts