It is common knowledge that the house cat can be traced back to the Egyptians who considered the cat a sacred animal. Not many know there was also a cat in the stable in a little town known as Bethlehem at the time Jesus was born. There is a legend handed down through the ages and it goes as follows.

Shortly after the birth of the baby Jesus, his mother Mary was having a really hard time calming her child. She was weary after traveling and giving birth and asked God for his help. Legend says a mother tabby cat with a new litter of kittens was in the stable at the time and she poked her little tabby head up for Mary to see. The cat then came over and climbed into Mary's lap. About this time the baby Jesus began to cry again and nothing would calm him. The cat jumped from Marys lap and curled up next to the baby Jesus. Mary was unable to remove the cat from the manger. The purring became louder and louder until all of the animals were synchronized to the calming sound. That night animals and people alike slept well. 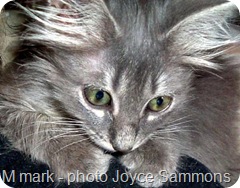 The next morning Mary awoke refreshed and asked God to bring a blessing onto the cat. She traced the letter "M" on it's forehead and that is why all tabby cats have the letter on their forehead. It is the letter for Madonna and serves as a reminder that God sends extraordinary help in a time of need.

In the 12th century there existed a group of men known as the Knights Templar whose job it was to provide safe passage to the Holy Land. These knights held positions of trust and honor. Eventually the men succumbed to greed and power. They went from being trusted to hated. During the French Inquisition the men were arrested and tried and convicted for heresy. They told tales of the devil appearing in the form of a black cat. They admitted to devil worship and sacrificing young girls and babies. This appears to be the first connection between the black cat/devil worship/witch superstitions that continue to this day.

Cats in other parts of the world were associated with female saints until the church fell into major disputes in the 13th century. People became disillusioned with religion and its strict rules and abuse of the rules by leaders of the church. Wars were being fought over religion in England, France and Scotland. Until this time cats were associated with female saints. Now they were being used as a scapegoat by religious persecutors who decided cats were created by the devil and demons were inhabiting the earth in feline form.

Pope Gregory IX (1170?-1241) was the founder of the Papal Inquisition and declared all cats were of the devil and ordered them destroyed. The estimated number of cats burned in Metz, France was close to 1000. Around this same time period Pope Innocent VIII instated a law in Christendom that all cats be tortured and killed. I haven't found any numerical data estimating how many cats died during this time period.

Personally I think it sad that the cat began as a comforter to the baby Jesus to being exterminated through the ages as a satanic creature created/and/or inhabited by Satan himself. Equally sad is the fact that pagan goddesses and women unable to defend themselves were the target of witch hunts.

Witchcraft officially became a felony punishable by death in England in 1542 and the different changes in the law can be found at http://en.wikipedia.org/wiki/Witchcraft_Act. The law was broadened over the years to include death of the witch and forfeiture of personal property so many were accused of witchcraft because of their worldly possessions. The law changed somewhat and eventually witches were tried in common law court. In laymans terms this meant they were hanged instead of burned. Years later it became a crime to pretend to be a witch. Cats as familiars to a witch superstitions became widespread during this era. However it was more of a partner/helper/protector to the witch than a demonic feline.

There is little information on cats as familiars to a witch during the witch trials in Salem, Massachuettes in 1692. This came as a surprise to me as I've always associated those trials with the typical black cat/witch scenario. A dog belonging to John Bradsheet was found guilty of witchcraft and hanged. The Salem trials can be traced back to several causes. Politics was one explanation. One part of the town wanted to separate from the other. Contamination of the food supply with ingredients that caused hallucinations was another possibility. Puritians believed in the power of a witch to call up the devil and harm others. Cold winter days and teenage boredom can also be blamed. There were books involving prophecy and fortunetelling were circulating and were popular reading for girls during 1692. There may be references to black cats as familiars during this period but I haven't found them in my research.

I live in an area where black cats cannot be adopted out the week of Halloween. There are satanic cults and there are people who would just love to torture and kill a black cat. I totally agree with this unwritten law many shelters in the U.S. enforce.

Cats as familiars to witches has been over exaggerated by both written and video accounts in history. I may be committing a big no-no but I can tell you the subject of my next story as it does tie into this one. In Part 2 I plan to discuss the cat as familiar and how it is a love story between cat and human. In Part 3 I will explain how modern Wiccans(this isn't your witch dressed in black on a broom) obtain familiars. I will go in depth as to how a familiar is chosen (it's not always a cat).

I would like to add a disclaimer to this line of articles. I am reporting history and do not take any stand endorsing witchcraft. I hope Christians, Wiccans and cat lovers can unite on one thing. We all LOVE our cats and are totally against anything and anyone who would harm a cat.

The Islam version of the M tabby marking

Cats as Familiars Part 1:From Blessed to Persecuted to Cat Facts