Cat’s ears can detect sound that we cannot. Hearing is well developed in the cat. A cat can hear high pitched noises that even a dog cannot hear and dogs have an excellent range1. As a nocturnal predator and hunter a cat’s hearing is neaded to locate prey6.

Cats also have very expressive ears unlike us. A cat’s head will turn to the source of the sound, although frequently if the sound is benign the head stays firmly looking away while the ears lazily turn towards the source and listen and “watch” and wait….!

Cat’s ears move forward and backward to locate the exact source of the sound. The eyes follow. The inner ear of the cat has a mechanism that provides the cat with a great sense of equilibrium1. This is used to right itself when falling so that it lands on its feet even when falling short distances. Cats, however survive falls better from an optimum distance from the ground (see cat falling).

Timmy our stray cat is very alert to danger. When he eats his ears are more or less permanently directed behind and to the side to pick up approaching danger while he is occupied stuffing his face.

The cat in the picture, above, is doing the same thing. Cats ears are wonderfully expressive and useful. Not only do they hear a lot they provide signals to other animals. Have a look at the tamed wild cat, the Serval, for an example of the pattern on the ear which is turned towards other animals to frighten them as the cat is signaling aggression.

The origin of the “back of the ear pointing forward” posture is that it is between the defensive flattened posture and pricked forward posture. In short it means ready for trouble. The ears can be flattened quickly from this position. The signal to the other animal is “ready to attack”.

Structure of Cats Ears – how they work

There are three parts to cats ears: 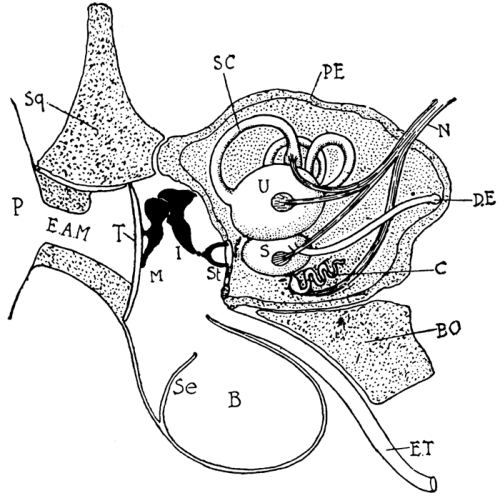 Sound, which is essentially vibrations in the air is received and collected by the ear flap and channeled to the ear drum. The ear drum moves as a result (a bit like the speakers of a stereo). This movement is transmitted to the three bones in the middle ear because the bone nearest the dear drum, the malleus, rests against the eardrum. The sound is passed from one bone to the next and thence to the cochlea of the inner ear.

The cochlea is filled with a watery liquid, which moves in response to the vibrations coming from the middle ear via the oval window. As the fluid moves, thousands of “hair cells” (40,000 being 25% more than for humans6) are set in motion, and convert that motion to electrical signals that are communicated via neurotransmitters to many thousands of nerve cells. These primary auditory neurons transform the signals into electrical impulses known as action potential, which travel along the auditory nerve to structures in the brain stem for further processing4.

A cat can distinguish between sources of sound that are a mere 3 inches apart at 3 feet away6, a very useful facility when tracking small prey at night or in twilight.

There are apparently 5 basic ear signals and which relate to being:

The ear flap is controlled by a number of small muscles that allow the ear to move through 180º6.

Relaxed: when the cat is relaxed her ears naturally point forward and outward, in a waiting posture ready to be activated.

Alert: the ears jump to alert mode spontaneously and with great fluidity. Pretty well any slight sound will result in a redirection of the ear nearest the sound swiveling to face the sound to maximize the reception. If the cat turns towards the source of the sound both ears are pricked and pointed in that direction.

Agitated: When a cat is agitated, the ears flick and twitch. If the cat has ear tufts such as possessed by some of the grandest of the Maine Coons this ear twitching is made more noticeable.

Defensive: When defensive we know that a will flatten its ears, unless of course you’re a Scottish Fold, which sends out the defensive signal all the time. The idea in flattening the ears is the obvious one, to protect the them when the fight starts.

Aggressive: this relates to a cat that is hostile while not being frightened. The ears are “rotated by not fully flattened”7. The backs of the ears are visible. The position is half way between alert and defensive. The signal says to other cats that this cat is ready to attack and not frightened. The reason why the ears are not flattened is that that would send the defensive signal when the signal is ready to be defensive only. This posture has evolved into the cats ears having markings on the back of the ear flap, in some cat species, that look like eyes. These white marks (ocelli) make the cat appear more frightening.

[Note: the apostrophe has deliberately been ommitted from “cats” for search engine optimisation reasons – sorry if that irritated].