According to Dr Desmond Morris domestic cats exhibit 4 fundamental play patterns. Although they are modified by a cat’s individual characteristics. The picture below is of an F2 Savannah cat playing in an off-the-peg cat toy: a tunnel. I suppose the tunnel is a part of the mouse-pounce pattern of play; hiding and pouncing. 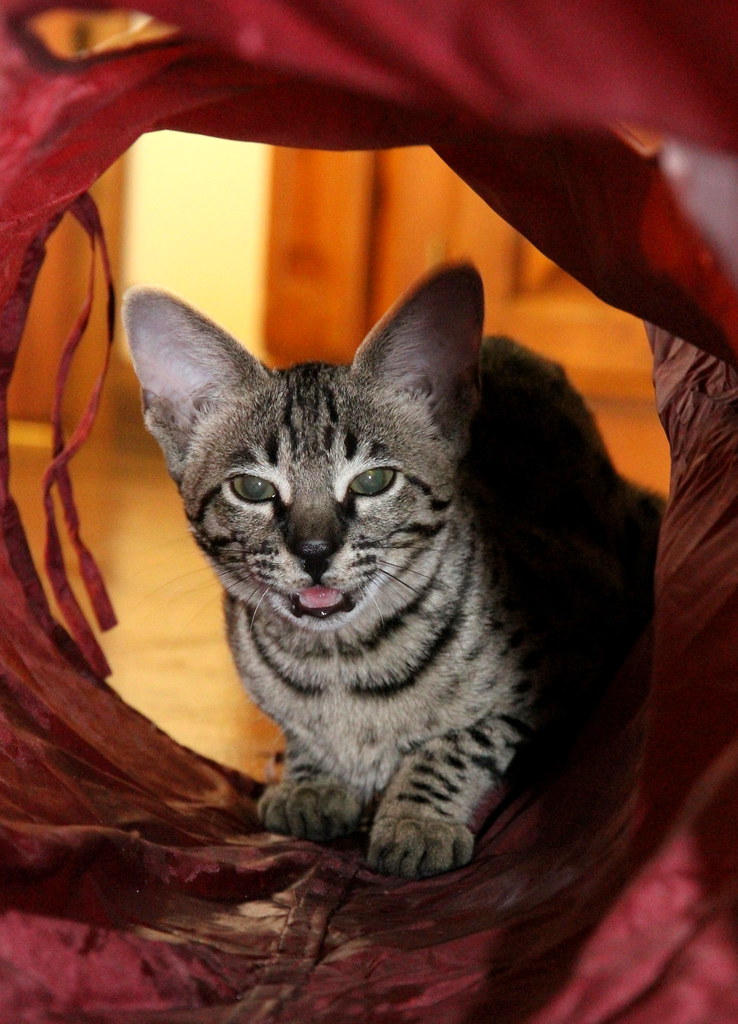 We all know this one and have some scratches and bite marks to prove it. It is the ‘earliest form of play to develop’. It starts at about 3-weeks-of-age with litter mates. They don’t hurt each other. A first they lack sufficient strength and later they learn the limits of play-fighting because the ‘victim’ complains which terminates the encounter. Cats ‘detune’ their aggression levels in play-fighting. At four weeks the play becomes more elaborate. At this time three different types of play-hunting starts.

This is a video by me created many yeas ago! It is Savannah cats play-fighting very noisily and the aggressor goes too far and is told to stop by the ‘victim’. The aggressor was an F1. I think the victim was F2 (second filial and smaller).

An imaginary rodent is hunted. The kitten hides, crouches, stalks and then rushes and pounces on an imaginary rodent. The ‘rodent’ is a small object on the ground or, when with mother, it might be her tail. The video below is not a mouse-pounce but it made me smile. It is a cat testing an unknown object to see if it is dangerous.

This involves leaping for a object above the ground. The cat makes an upward leap and swats the object with her forepaws. The attacked objects are usually cat teases and objects thrown to the kitten. Flies can also be attacked.

There is an object on the ground. The kitten scoops it up into the air and backwards over her shoulder. The kitten turns and pounces on the object. This mimics what will happen given the chance when she scoops a fish out of water. Although this is exceptionally rare in domestic cats it is part of its wild cat ancestor’s hunting behavior (North African wildcat).

A kitten’s imagination is formidable. The ideal objects to attack are soft and light. It should be light so it can be moved easily to prolong the play and soft so that is can be bitten and clawed with satisfaction. Simple homemade toys often meet these requirements.

Playing with your cat is probably the best way to become close to him or her. The cat loses her caution in her instinctive desire to hunt. I think it is one of the best ways to socialise a feral cat. They find play irresistible and so are automatically drawn closer to their human companion who directs the play.