This is a post about domestic cats in France, how French people refer to their cats etc. The domestic cat male is commonly called a “chat” while the female is a “chatte” and the youngest a “chaton”. The word comes from the low-latin “cattus” which according to the Littré’s edition of 1878, comes from the verb “cattare”, meaning to watch, the cat is considered to be a hunter who stalks his prey. This latter interpretation is controversial, given the terms used in the Afro-Asian languages. 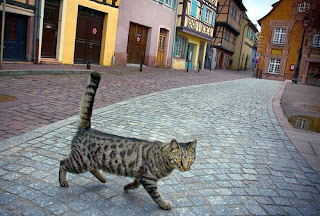 A more familiar term for cats in France is to call the cat by the word “minet” and the kitten by “minette”. This term has been used since 1560, from “mine” (pronounced like “mean” in English) , a popular name for the cat in the Gallo-Roman. This word is the origin of the expression of “potron-minet”, which means “good morning”. According to the Littré, it would be a distortion of the grazing minet, i.e. when the cat, who rises early, goes to seek his food.

This explanation is probably from the author of the nineteenth century, Claude Duneton. This expression comes from “poitron-jacquet”, backgammon designating a squirrel (morning animal walking lifting the tail) and designating the poitron post. From Potron-minet means “at a time when we see the back of the cat.” As for the “kitten” or “minette” which “mine”, when the term is applied to humans, a young man or young girl who strives to please and is very much concerned about appearance.

Cats in France that are male and not castrated are called a “matou” a term of uncertain origin that would perhaps be a derivation of “mite” as in “chattemite”. The cat is also colloquially called “Mistigri” composed of the word “miste” a prefix, meaning skillful, and gray, colors.

In slang, a cat is called a “greffier” (English = “clerk”). There are two opposing explanations for this. First, the pun on the word “griffe” (English = “claw”) is obvious and on the other hand, the fur of some black cats has an area of white on the chest (Tuxedo cat or black and white cat), and it refers to the fold of white as was seen on the black dress clerks until the nineteenth century.

When I was living in Paris back on the late 1970s I remember a young woman taking her cat on a lead for a walk down the pavement (sidewalk). That was very advanced cat caretaking for the era.

There is only one purebred cat associated with France; the Chartreux unlike America where many cat breeds have been created mainly in the middle of the 20th century.

Cats in France to Fun and Facts About Cats