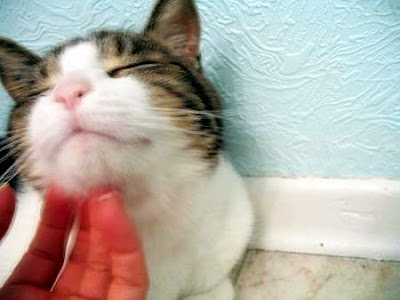 A cat’s purr is another thing that we don’t have and could do with. I’ve banged on and on about how cats are better than humans in some ways. The cat has heighten senses, is more athletic etc.

The cat’s purr is unique to the cat. We know it as a sign of contentment but it’s a bit more more versatile than that. The purr’s first job is as a communication from kitten to mother cat that she is receiving her milk from the breast. The mother hearing this knows all is well and purrs back to say I’m OK too. The purr also signals that the kitten is warm and not hungry (or becoming not hungry). Everything in order then.

When the kitten becomes an adult and humans become her mother and father it purrs for a similar reason; as a signal that she is receiving your friendship and she returns that through her purr by saying she if friends with you. It is a form of social bonding at it feels good for the human to hear it.

You may have heard your cat purr when it is a little frightened too, for example, at the vet. My cat certainly does. She becomes passive and purrs as if to say a) I’m not a threat to you, I am unlikely to attack you and b) as a result please be nice and friendly with me. Cats also purr when when hungry, in pain and upset. Veterinarians report that the cat’s purr is frequently heard when the cat is in continuous pain and/or very ill. Cats purr when in the presence of a human or a “known cat”2.

There was recent discussion on the internet about a type of super purr that a cat uses to tease us into producing food! It has a trill or higher pitch at the end, which tickles our parenting instincts.

Wild cats have a range of vocal communications that often includes purring but not all wildcats purr. The purr is described as a “murmur pattern”.

The sound is produced by the “vocal apparatus”. The cat’s purr is unique. The cat’s purr is unusual in that it is produced when inhaling and exhaling2. Normally animals vocalise when exhaling.  Breathing in and out alternatively tenses and relaxes the muscles of the voice box and the diaphragm. The air creates “pressure effects” that results in turbulent air flow through the trachea. The process is also described as being produced by the activation of the laryngeal muscles and the diaphragm causing a repetitive build up and release of air pressure in the glottis2.

The trachea is the windpipe which connects the airway just below the throat to the lungs. The glottis is the combination of the vocal folds and the space in between the folds3. The air turbulence produces the purr.

A purr can be felt and heard. Sometimes when we can’t hear it we can feel it in the cat’s throat. We feel the air and muscle vibrations2.

The “cyclic pressure changes are superimposed on….breathing” creating the familiar sound of purring. Kittens purr from about 2 days of age and they do to instinctively1.

I don’t know of an equivalent human sound or body language which is so useful. It even sounds warm and friendly. Why can’t we have a purr?

From cat’s purr to cat facts