I’d like to discuss one function of the cat’s tail that I am yet to see mentioned on any webpage or in any book. The tail has many functions. It is well known as a means of communication. I won’t cover this in too much detail because they are largely known but I do see some misconceptions even on the best websites. For example, the tail swishing from side to side is described as signalling anger. This may be the case but not always. Often it is a sign of acute mental conflict and we can see it happen in a cat that is on open manicured ground trying to do the impossible and hunt when there is no cover.

The relatively sterile human environment has resulted in the outdoor cat’s natural instinct to hunt to be a source of frustration resulting in emotional turmoil. The conflicting desires are (a) to stay still but on open ground this is wrong and (b) to attack prey, which once again is wrong and will not result in success because the cat is exposed and too far from the prey. 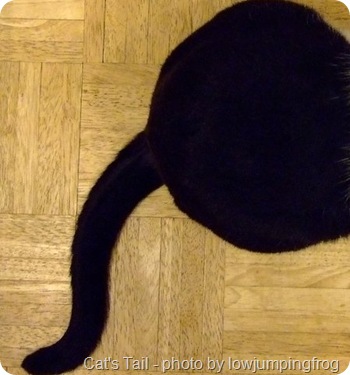 Yet the behaviour I would like to talk about is the action of a cat’s tail when it is used to touch and feel objects. When, in short, it is used in the same way as our hands.

There are two examples I would like to refer to. Firstly my cat. When I go out in the garden with her she will follow behind and then catch up. When she catches up and passes me her tail curls to my side and gently touches my leg and she may pause and then move on. This is her confirming to herself my position in relation to her and I will presume that is also telling me of her presence. It creates a comfort zone in much the same way scent exchange does. It is not scent exchange because the tip or last third of my cat’s tail is touching me, no more.

The video below of MAGIC the tallest domestic cat and now a famous cat because of that, demonstrates this beautifully. Although I think Scarlett’s MAGIC is both touching and scent exchanging simultaneously. Most of the interaction from MAGIC is scent exchange but I feel not all of it is.

You can see the whole tail curl around the Andreas’s head as if it is feeling the head and caressing his head. It is great to see. Here is the video:

So to recap, the tail communicates the cat’s mood including the unintended mental conflict. It also provides balance especially for the arboreal cats, the forest dwellers and tree climbers such as the clouded leopard and margay. The tail of the clouded leopard is awesome and the margay climbs like a monkey. There are more tree climbing cats. It also exchanges scent. But it is also used to feel and touch in a most tender and loving way as shown in this video.

From Cat’s Tail to Cat Facts

Cat’s Tail – photo – this is a cropped original as allowed under the creative commons license: Attribution 2.0 Generic