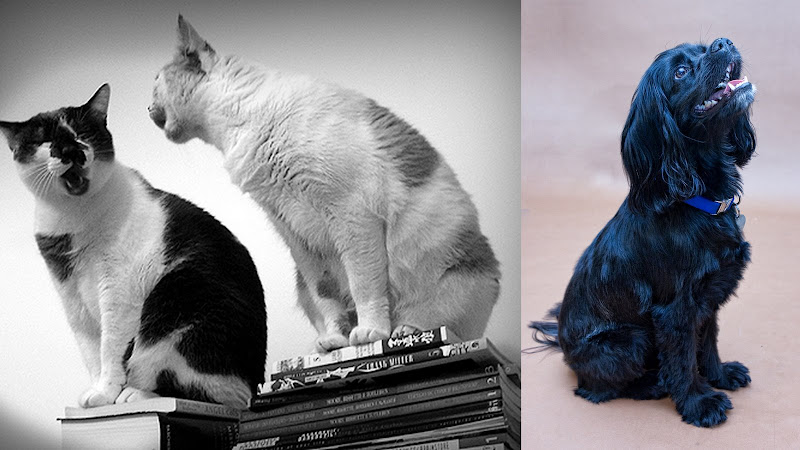 Cats vs Dogs….“You know these dogs will obey anything their master says…look at him panting for a command…! Photos by (left) fofurasfelinas and (right) Corie Howell (Flickr for both)

You know in a general contest of this sort I say cats win (I would!) but this is not what the New Scientist (NS) says in a comprehensive analysis. Their research indicates that the opposite is true. The people are divided. Cats are better than dogs some say and others say that dogs are better than cats. How do you work out the “correct” answer? That is the problem to be honest. And the NS recognises this difficult in methodology. The underlying problem in doing a general assessment of cats vs dogs is that there are more cat companions than dog companions. The people have given us the answer before we start, it could be argued. However, the NS gathered together a bundle of scientific research to try and produce a conclusive and more objective answer to this age old question. The eleven individual areas of assessment are listed below. I have used my own words and generally, but always, come to the same conclusion.

Cats are way smarter than dogs; that’s why they tend to accept supervisory roles…..

Although on average the dog’s brain is bigger than the cats brain, the cat’s brain is larger as a percentage of overall body weight (inline with smaller mammals). But a bigger brain does not mean a smarter animal. However, cats have better brains as they have more than twice the number of neurons in the cortex1. [Neuron: “an excitable cell in the nervous system that processes and transmits information by electrochemical signaling”] Cats win

NS call this “shared history” (meaning, I presume shared with people). Dogs (from 50,0002 to 16,0003 years ago) were domesticated before cats (9,500 years ago). In this topic of assessment in the cats vs dogs debate the dog will win here because it has had a greater utilitarian role and therefore was domesticated sooner. Dogs win

The argument here is that as dogs are pack animals and cats are essentially loners, dogs bond more naturally with human companions who should be the pack leader. I see the point. But cats are very adaptable and bond very closely with humans in perhaps a more intelligent way. Dogs just loyally follow the pack leader without question. Dogs win

These are my thoughts based on the NS article. As cats are as smart or smarter than dogs you would expect them to understand as well as dogs. However, the barrier would appear to be linked to bonding. Cats are less interested in obedience etc. It is a bit like a bored but talented student at school who under performs. The impression given is thereafter that cats understand less. Cats don’t like eye contact (Maine Coons are the best at eye contact probably). While dogs hold eye contact and are therefore in a better positionto look at our faces for indications of command6. That said my experience is that cats do understand as well as dogs. It is more a question of opening up a channel of communication through bonding, which as I have said can be as good as with a dog provided the person plays it correctly. NS says that the dog wins under this heading. I say: Cat and Dog equal

I made a post about cat intelligence by the way. NS finds in favour of the dog but I disagree. There is no evidence to say dogs are better at problem solving. But there are indications that domestication makes both cat and dog less good at problem solving because we solve all the problems of survival for them! That is why wolves are better than domestic dogs and wild cats sharper witted than domestic cats. Cats in between wild and domestic, the wild cat hybrids are thought to be sharper and it shows in their more demanding less passive behavior. I say Cat and Dog equal

How good are they at communicating by the use of their voice? NS says that the vocal repertoire of cats is limited. I understand the point they are making but in the wild, cats have, it seems to me, a wide range of vocalisations (see Cat Sounds or for example Mountain Lion sounds). The problem may be an extension of the domestication process (i.e. less demanding life demands less good vocalisation). Anyway my cats employ a wide range of sounds (but that is not a scientific argument). Conversely, dogs it is argued may have learnt new vocalisations to talk to us. The same could be said of cats but there is no science to substantiate that. Above all cats are quieter by a mile. That counts for a lot in the modern and noisy world. So Cats win

NS calls this “tractability”, a more scientific term. This cats vs dogs assessment is easy because it is well known that dogs are easier to train because they are pack animals looking to the leader (us) to guide them as opposed to the solitary cat who in my case goes in the opposite direction to me or deliberately sets out to be disobedient! (only kidding – she is actually pretty responsive). Dogs as mentioned attend to eye contact and other cues better and imitate their human master7.Dogs win

This concerns the controversial topic of how much wildlife is killed by the cat or dog. This is a difficult cats vs dogs area of assessment. Cats have a bad reputation for killing wildlife but often, I feel, the science is defective and disseminated by scientists and politicians who want rid of the feral cat any way possible. I am yet to see sound incontrovertible evidence that says the cat kills the kind of wildlife as stated by some scientists. However, wildlife is no doubt killed to a degree. Dogs also upset wildlife by disturbing nesting birds etc. As to the amount of land required to feed one dog or cat; the cat wins apparently.

Well we don’t need much science under this topic do we in the cats vs dogs debate. Dogs win hands down. The usefulness of the trained dog is legendary, from detecting drugs to trapped people and catching criminals, for example9. The cat is great company, reduces stress in people, is low maintenance and was domesticated to keep down rodents. So it is a closer contest than one thinks. But…Dogs win

Note Cats vs Dogs: the conclusion here is not that of the NS report!

From Cats vs Dogs to Cat Facts

2 Robert Wayne’s team at the University of California, Los Angeles

6 Alexandra Horowitz “Inside of a Dog” published September 2009 – this is my interpretation of what he is saying as described in the NS article.