↓
Home→Uncategorized→Cecil the hybrid wild cat? who wants to live with us

Cecil the hybrid wild cat? who wants to live with us

Cecil comes for his evening drink

Ready for the off

Look at those feet

Very tongue in cheek I decided to refer to 'that cat' who was coming around in the early mornings and howling on our patio as Cecil.

I just came to the conclusion the relationship had moved from a 'that cat' to something more personal. Geography - we live at 750 meters on the Andalucian/Murcian border in Spain and our nearest neighbour is at least a kilometer away.

In nearly five years we have spotted two wild cats usually at night if we have been out late. There are no main roads or even secondary roads near us.

Our menagerie - there is a main house and an annex for mother in law, outbuildings and a swimming pool. Lots of natural cover which our two dogs and four cats love. They are all neutered.

Cecil howls like an old fashioned tom but worse. Despite being under pressure from our pets he insists on not being very far away. Over time he became cheekier and would sit on the kitchen window and eventually negotiated the cat flap to come for food at night. In the end we kept food outside for him.

Initially he was looking like a thin young cat - now he looks very good and getting heavier. He certainly weighs a lot more than our oldest male cat Freddie who growls at him whenever he gets a chance. For a while the twilight hours became hell for us humans. It is generally 30-40ºC by day and not much less by night. There was this continuous tirade of dogs grumbling and cats fighting.

He got chased up large agaves on to roofs but he insists on living with us. He has really annoyed the family animals by going in for a stroke by my mother in law in whom he has put his trust.

However he will then give her a bit of a bite and go off. He has been a bit of a stalker on the two female cats who quite like him but he gets pushy if you know what I mean.

As he has grown more brazen it has meant I can now photograph him if the dogs aren't around. I am not sure how this will all check out. He is a beautiful animal. These photos are recent and I have concentrated on showing his markings and paws.

Cecil turns up at our mountain home and wishes for some degree of acceptance. These pictures were taken on our return from our nightly walk with our animals. Cecil takes the subordinate position. 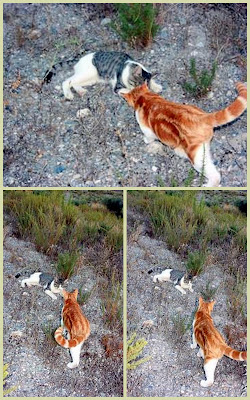 Collage above - from top and clockwise:

A grrrrrrrowl but everyone holds the line. Freddie approaches - Cecil's eyes are near closed. Nearer... 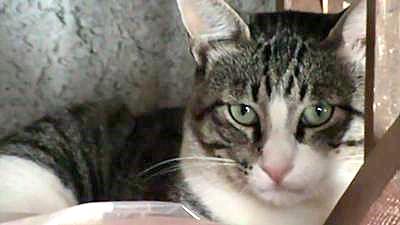 Cecil - what an expression - very human

Cecil the hybrid wild cat? who wants to live with us to Feral Cats