I would like to celebrate the life of Freddie a fine black moggie cat who had some Norwegian Forest Cat in him, I believe. He was the brother of Missie, who died in 1994. I had not seen Freddie for about 12 years or so. I am not sure. He lived with my former partner Geraldine for the last 15 years or so of his life.

Geraldine and I adopted Freddie when we lived together in Notting Hill Gate, London. Around the corner from us were a couple who kept a female domestic longhaired cat with a black and white coat. She was almost perpetually pregnant and would soon give birth to Freddie and Missie. I say she was a Norwegian Forest Cat mix.

The owners said they kept her pregnant as her temperament was better when pregnant. Sounds as ridiculous now as it did then. All I know is that Freddie and Missie's mother to be would visit us regularly for food as she was always starving. She loved lightly cooked kidneys and would rest on top of the micro-convection oven while they were being cooked (see picture - apologies for the photo quality, they were taken on film, a cheap camera and using flash - couldn't get worse!). 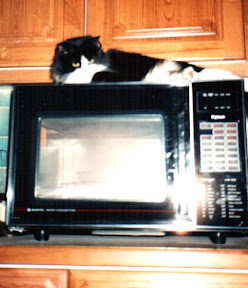 Anyway before long Freddie and Missie were born and as I had fed their mother the people who kept her knew us and we asked if we could adopt a kitten or kittens. We adopted Freddie and Missie. I can remember the adoption process well. Freddie came to Geraldine and sat on her lap. He chose his human Mum as sure as a cat can. Missie was extremely cute and very athletic. They both had extremely soft, silky fur and gorgeous plumed tails.

These were my first cats and I think the same could be said for Geraldine. We had fairly recently bought some leather furniture! Well, you can guess what that looked like after these two monkey's spent half the day chasing each other around the house and over furniture.

After a good bit of activity they would "zonk" out: 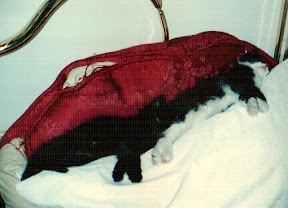 Freddie left and Missie, right
zonked out in a line.
I wonder what happened to that cushion!?

As we lived in central London we only had a small courtyard garden but we very occasionally let them out at the front of the house under heavy supervision. It was hard! 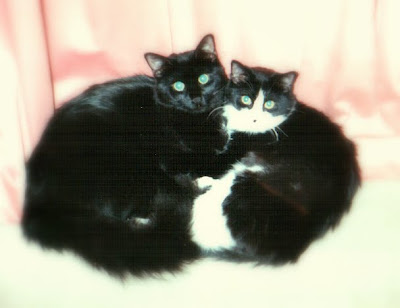 Freddie and Missie
brother and sister

When Geraldine and I split up in around 1994, I took Missie and Geraldine Freddie. By the way I used to call him Boo Boo.

I saw him a bit after that and then no more. When I went back after a long break he still recognised me, mainly by smell.

You know, what is sad is that I forget him, the feel of him, his smell, his meow and his character. But I know he was a beautiful boy, gentle, loyal and loving. Missie was the athletic go getter of the two.

I received an email on 3rd February from Geraldine. I know she won't mind if I publish most of it:

Just to let you know Freddie passed away today. RIP

On Christmas eve, at 2.30 a.m. (officially Christmas Day then) he had a thrombosis. His back legs collapsed from under him as he was walking. Earlier that day, he was like "a young lad" as I e-mailed you. Seemed in great form. A saddle thrombus they call it, where the clot gets lodged in the main artery, where if divides to go to the back legs. He went to the vet immediately...the vet down the road has 24 hour services and a little hospital there, and survived it, on short odds of survival without total back leg paralysis. He was there for 6 days and then discharged for "nursing care at home" with his left back leg very good and his right one affected but he got his walking back pretty good and was able to jump on the chairs and the bed etc. That was almost a miracle and great. But then 2 weeks ago he started to go a bit down hill and his appetite started going. Then last Thursday he stopped eating. He was at the vet on Friday and on Monday, but nothing cured him. He had blood in his urine, but nothing else obvious other than the existence of the 2 very slow growing small lung tumours discovered last June (which might and might not be malignant), and heart and kidney issues, but not such as to kill him, but he must have felt just generally bad, he was having to take a lot of tablets, getting very thin and frail and was ready to go.

Today I took him back to the vet for assessment and the vet said he would not get better. I had intended to take him home to have it done if it was to be done now, but since he was there anyway, it was less stressful for him to have it done then. He knew he was going and kissed me goodbye; he lifted his nose up when the needle had been put into the rubber cannula and touched my lips with his nose, which was a very rare thing for him to do. It was instant then as the stuff was injected. No reaction, just he is there one minute and the vet says he is "gone" the next. He had a very nice passing. I brought him home for a few hours after, until his spirit had departed.

So there is it. I have had the pleasure of sharing part of my life with a wonderful sweet boy cat who has now gone over the rainbow bridge to join his sister who died 15 years ago. One day I hope I see them both again.

From Celebrating Freddie to Cat News