I have a beautiful blue mackerel tabby Maine Coon named Chani that I have had for eight years. Chani is the only purebred cat I have ever owned, as mostly my house has been populated over the years by strays and rescues.

Chani is an extremely sweet and even-tempered cat, although she has gotten a little cranky in her senior age. She is still the mother and the boss of the pets in our household, and takes care of both my enormous and sweetly dumb tom, who is quite a bit bigger than she is, and our little Siamese manx cross, who is Chani's best friend.

She takes it upon herself to make sure her housemates are fed (by always being the one to ask me for food when they've cleaned their bowls) and bathed (she bathes both of the other two cats, and regularly offers bathing to both me and my husband -- which is sometimes distracting if we're sitting on the sofa watching a movie and she decides to creep along the back and bathe our heads!)

Chani regularly trills, and this is the most common noise she makes. It is a sweet little sound, she seems like she's singing happily!

Although all of my cats are quite striking (my tom is as I said enormous, at sixteen pounds even in his old age, and not overweight at all, he is a longhaired smoke with a black overcoat and a white undercoat and a huge white ruff, my youngest manx cat has beautiful medium blue eyes, a striking blue Siamese coat, and the sweetest face) I believe (and my husband agrees) that Chani is the most beautiful of our cats.

So with a fine temperament, friendly and mothering personality, playful, beautiful, and gregarious, I would definitely recommend the Maine Coon to others seeking a wonderful pet. 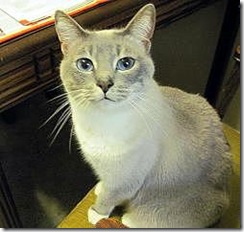 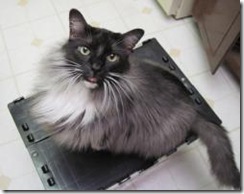 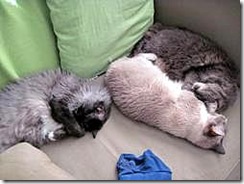 Chani (heading the page) is around 13 lbs, a spayed blue mackerel tabby Maine Coon.  She is my only purebred cat, obtained through a reputable breeder. She is a pet cat though, as you can see she doesn't exhibit at least one Maine trait -- tufted ears.

Francis is around 11lbs. She's a spayed tailless pointed with white domestic shorthair when she was rescued as a kitten, we believed she was a little boy, which is why she has a masculine name -- She is actually named after Francis Urquehart, from the series House of Cards, because Sir Ian Richardson passed away the day we found her. She was found by a jogger in rural Louisiana. She was hiding in a bush as the jogger passed, but came out and started crying when she saw it was a human and not a scary animal -- like a coyote.

She was very sweet and submissive, and unlike most strays was easy to simply pick up and take home. The jogger was my husband's aunt, and so we got our youngest girl. It is my belief that someone who had adopted Francis as a "cute pet" then tired of her and dropped her off in the countryside to fend for herself. This is not an uncommon thing in the rural United States. She was very small and very glad to be rescued. Although she may look a little chubby in the photos, she is actually very svelte and slender. She looks cobby when she's curled up because of her tailless manx-like traits. She has the manx rabbit hop run for instance. When she sleeps curled up, since she has no tail to tuck herself into, she tucks herself up with one of her long back legs, and rests her chin on that.

Sano is our neutered tom. He weighs 16 lbs in his old age, although he was even heavier when he was a young man and muscular 🙂 He's a black smoke domestic longhair with a white undercoat. He is extremely sweet, but very unintelligent. I think he has always had developmental problems because he was taken away from his mama too early.  I rescued him from a pet store when he was so small he could sit (in my not very large) palm. I think he was between five and six weeks at that time. He is my eldest cat at ten years.