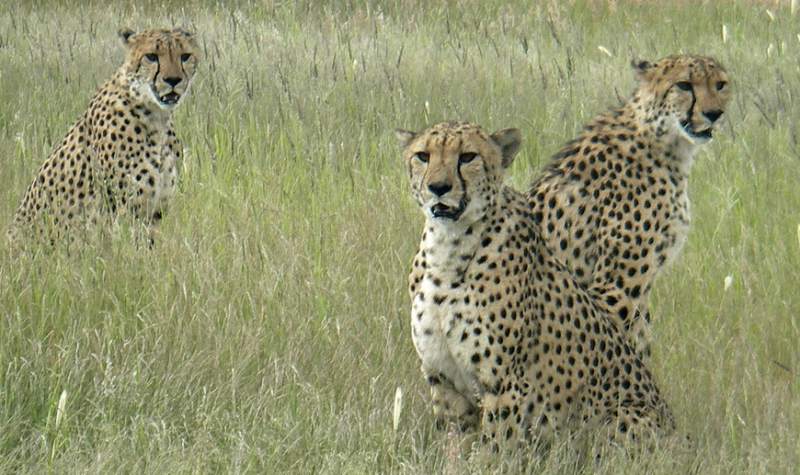 The Cheetah habitat is, as this fine photograph shows, an open one, suitable to a group of other animals and plants with which this fine cat shares the habitat (a biotope).

The picture above was taken in Namibian grassland. Namibia (opens to Google map in new window) is located in the South East of the African continent and is a “hot spot” (in fact the prime spot) in the dwindling Cheetah habitat.

The map above shows the areas where the Cheetah (Acinonyx jubatus) was found (pink areas) and where this lesser cat (the smallest big cat) can still be found (the red to light brown areas indicating higher to lower population).

You can see a more uptodate range map and more on this page: Cheetah Geographic Range.

It is readily apparent that, as is the case for all wild cats, indeed all wildlife, the Cheetah habitat has been much reduced by the usual intrusive actions of humankind. The world population was 715 million in 1750 and 6.7 billion today (2008). We need more space. Although Namibia has the largest population of Cheetahs of all countries (2,500 at 2008), apparently about 95% live on farmland. The cheetah population in Namibia was 6,000 in 1980.

It looks like living on farmland is the only way the Cheetah can find some space to live, or die, as thousands have been hunted and killed by farmers. Click on this link for some graphs on population projections. Cheetah’s hunt medium/small mammals, and doesn’t differentiate between farm livestock and gazelles – read about the Cheetah food chain.

Other than mainly in the south of the African continent, the Cheetah can only be found in Iran, where there is a small number of about 50 (see map above – low density area). The Iranians have decided to protect the Cheetah. A bit late don’t you think? But they are doing a good job apparently (click on this link: Iranian Cheetah).

It is the Asiatic Cheetah that survives in Iran. The Iranian Cheetah habitat includes snow covered areas in winter. Apparently a Cheetah family was photographed in 2001 by the Iranian Department of the Environment near Tabas (opens to Google map in new window), on the far eastern region of Iran near the Afghan border.

The Cheetah likes an open habitat such as arid semi-open grassland, savanna, semi-desert and even mountainous regions because he is better adapted to hunt under these conditions relying as he does on stalking and chasing. The Cheetah has stunning acceleration at 0-60 mph in 3.8 seconds and at full speed the Cheetah’s stride covers about 25 feet or a maximum of about 8 meters. The most notable single leap by a human is the long jump record of Bob Beamon of 1968 when he jumped 8.90 meters. Read and see diagrams on cheetah speed.

The Cheetah is highly inbred. This is not it seems due to the current low population. Although it would seem that this would contribute to the problem, but because of a 50% or more drop in the world population during the ice age. Alternatively, the then population was substantially prevented from reproducing at that time. Inbreeding will though take place where the population has fallen due to a restricted habitat. A classic example of inbreeding in a wild cat is the case of the Florida Cougar. Inbreeding affects the health of the animals and therefore makes survival even more precarious.

Clearly the Cheetah will have a harder time recovering from inbreeding with an ever reducing population. This is a hidden consequence of the encroachment of mankind on their habitat. Particularly vulnerable are the Cheetah cubs, a proportion of which die through illness as a result of a compromised immune system due to inbreeding. The uniformity of the genetic make up of the Cheetah population makes them all vulnerable to the introduction of a new germ.

Examples of the perfect Cheetah habitat are the famous African parks; the Serengeti and the Masi Mara in Kenya (see photograph above). The size of a male Cheetah’s territory can be very large if allowed; from 37-160 square km.

Update: I have just read an article in the Times Newspaper of 18th August 1973, more than 30 years ago (the information on this page relates to 2008). In 1973 there were grave concerns for the Cheetah due to erosion of the Cheetah habitat by the expansion of commercial ranchers. This is the point I made above. As the Times article so aptly says, you cannot farm successfully in a zoo. Farmers cannot share the same land as a Cheetah.

In 1973, there were about 15,000 to 20,000 Cheetahs on the African continent mainly in the South West (Namibia). This dropped to about one tenth (10%) of that figure over the last 30 years. The author of the Times article predicted this. He said that no one cared. That is still fundamentally the case. Or put another way not enough people who have sufficient power care sufficiently. Clearly the extremely large habitat requirement of the Cheetah makes it all the more difficult to share the land with humans, who simply do not know how to control their population growth.

Is it a foregone conclusion that the Cheetah habitat will be further eroded and in the not too distant future Cheetah will be living in the equivalent of zoos. And if so do we, as a world, care? See more: Endangered Cheetah.

Update 14-11-08: If you’d like to be cheered up about the Cheetah’s survival you might like to read this contribution by Patricia Tricorache of the Cheetah Conservation Fund: Why are farmers still killing cheetahs in Namibia. It looks like the brakes are finally being put on the destruction of the Cheetah in Africa.

This subspecies is considered to be critically endangered. The camera traps (cameras set up to be fired off by the movement of animals in front of the camera) were set up to provide information about population size, interaction with the environment and movements.

This desert cheetah population is fragmented. The biggest population is thought to be in Southern Algeria. But as is the case frequently with the wild cats we just don’t know for certain. Apparently the researchers have identified 4 different types of Saharan cheetahs by their different markings.

Update 12-3-09: Botswana Central Kgalagadi Game Reserve (CKGR) is to be mined endangering further the cheetah and other wildlife in Botswana. Read more here.