NEWS AND OPINION: At last, some sense and humanity from China thanks to the coronavirus pandemic. Some more good has come out of it. Because of the coronavirus pandemic which started in China, the government of China has drawn up guidelines to reclassify dogs as pets. At present this is a draft proposal. Dogs are currently classified as livestock. This is obviously hugely welcome by almost anybody. You don’t have to be an animal advocate to welcome this news. However, I am dismayed to note that there is no mention of cats being reclassified as pets in the report on AOL.com.

I’m a pet. What took China so long to realise it?

What is going on? Surely something’s gone wrong here because we know that both cats and dogs are treated as livestock in cat and dog meat markets in the South. The Humane Society called the change in attitude which is completely fundamental and long overdue as a game changer in animal welfare in the country.

China’s Ministry of Agriculture published a notice on Wednesday apparently that dogs were no longer be considered as livestock. In China “livestock” is a designation applied to animals which provide food, milk, fur, fibre and medicine or to serve the needs of sports or the military. Therefore to declassify dogs as livestock also should end their agonies of being treated as a supplier of meat and fur.

As far as dogs are concerned, along with the progress of human civilisation and the public concern and love for animal protection, dogs have been specialised to become companion animals, and internationally are not considered to be livestock, and they will not be regulated as livestock in China.

I take issue with the phrase “will not be regulated as livestock in China”. What does that mean? I hope it means that they will not be treated as livestock but that is not what it says. The metropolis adjacent to Hong Kong in China called Shenzshen has unilaterally banned cat and dog meat, incidentally.

The Humane Society International estimate that around 10 million dogs are killed annually in China for meat and these dogs include stolen pets. There is, as you may know, an annual dog meat festival in June in the city of Yulin.

To return to my earlier point. I’m waiting for an announcement about the domestic and feral cats of China. There should be complete parity and equality. There is no difference and if China’s government is making the argument that internationally dogs are considered to be pets and not livestock then that argument must apply to cats as well.

SOME MORE ON CHINA: 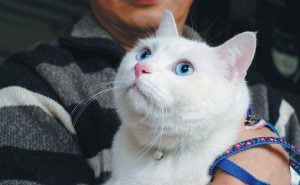 On one website today (teamblind.com) there is a question:" Do Chinese people hate cats 🐈?" It is not a good ...
Read More 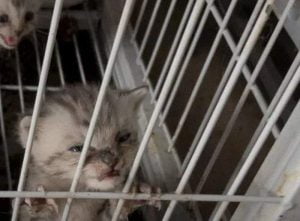 33 Chartreux cats abandoned on a building site in Shanghai

I am angry. I can barely write this. The Chartreux cat is a rare purebred cat. It originates in France ...
Read More 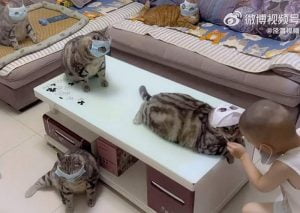 It has been described as cuteness overload. A three-year-old Chinese boy enjoyed himself playing a veterinarian putting Covid-19 masks on ...
Read More

The revered and iconic tiger is part of these five mythological Chinese creatures. A recognition by the Chinese people of ...
Read More

I have been scratching my head trying to figure out how to write about this so-called cat breed discovered in ...
Read More 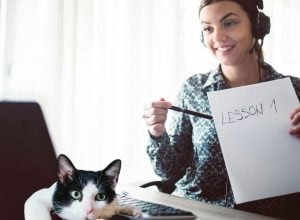 Art teacher sacked because her cat wandered into online presentation

NEWS AND COMMENT-CHINA: An art teacher, Luo, delivering an online presentation because of Covid, was sacked when her pet cat ...
Read More
Please comment here using either Facebook or WordPress (when available).