My cat Choccie was born under my bed on the 25 November 1998 in the middle of the night; number 2 of 3 kittens and the only boy. His mum was a tiny ex-farm short haired silver and white cat who was half Persian and his father a troublesome extremely large pure breed Norwegian Forest cat who had got my cat pregnant for the second time.

He was the biggest kitten I have seen and drove his mum to distraction not fully weaning until he was about 12 weeks old (only due to his mother hiding when ever he was around as by then he was much larger than her).

He was the most affectionate cat ever and was the golden version of his silver older sister Misty (who was run over when he was 6months old). 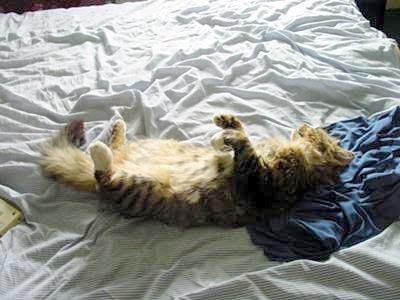 My big pud was an unfortunate wee fellow when he was younger suffering from rogue ulcers (probably from eating all those mice and birds) but the vet loved him and always commented on how he had still not stopped growing and he did not fill out those shoulders until he was about 3-4 years old.

His best friend was our dog Bob (a very very large collie) who's nickname was Rhubard and Choccies was Custard and also later on our young male black cat Kai.

When he was not hunting (usually involved Kai hunting later on and bringing him the results to eat) he found the most uncomfortable places to sleep on his back. He especially loved well everyone.

In later life losing most of his teeth did not calm his appetite. Unfortunately he inherited a Persian renal problem and he died 3 months ago.

But I am pretty sure he has children/grandchildren etc. in almost every other house within 1/2 mile of our house as no one wanted to be the one to take him to get the snip until he was a 4 1/2years old, oops.