There are perhaps three major distinguishing features of this rare and treasured wild cat that sets it apart, the spectacular coat pattern that looks like clouds, the very square muzzle and the thick and long tail that aids balance which this cat needs as it lives in and amongst the trees of large but rapidly dwindling forests. 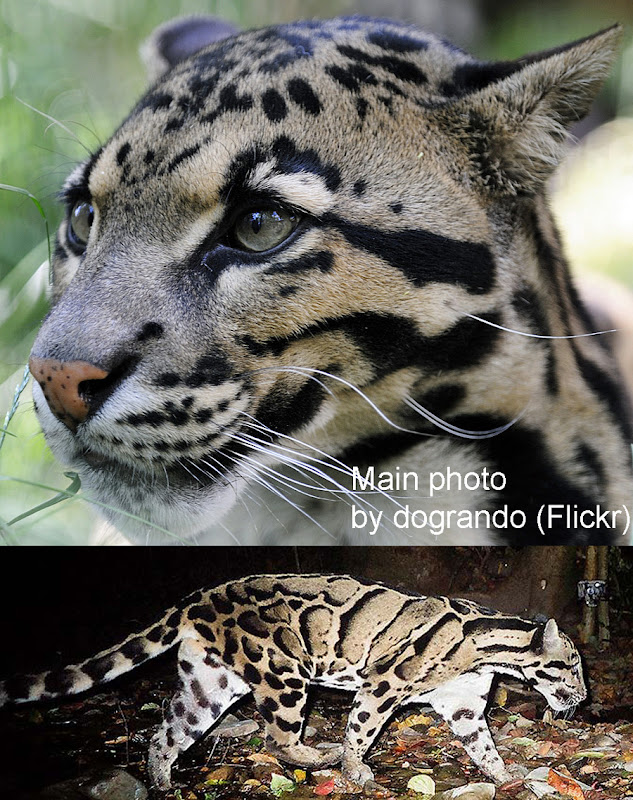 The clouded leopard is similar in size to a small leopard. The legs are relatively short when compared for example with the serval and they are “stout”1. The paws are large.The ears are quite small and positioned more on the side of the head and wide apart. The backs of the ear flaps have the usual ocelli or greyish spot ear markings set against a black background.The clouded leopard has exceptionally long, saber-tooth tiger style, canine teeth that are usually at least 4 cms in length.On the top and sides of the cat, the background colour to the coat’s pattern varies from “earthy brown or dark gray to pale of rich yellowish brown”1. The undersides of the cat are white or “pale tawny”1.

The markings, a form of tabby pattern, echo the rosettes in the domestic cat called the Bengal cat but they are larger and quite startling. In the lower photograph you can see the dark lines and spotes at the head that lead to lines along the neck and thence to the cloud shape pattern along the body to rosettes and large spots on the rump and thick banding on the tail. The coat pattern resembles somewhat that of the much smaller marbled cat.

The whisker pads and chin and throat leading to the underside of the body is white. Apparently there are melanistic (black) clouded leopards that have been reported in Borneo.

This is probably the most desirable wild cat coat, other than that of the tiger and it is in part the cause of the demise of the species through poaching. The other endangerment is loss of habitat due to logging operations. See more photos.