With the margay, the clouded leopard is probably the best tree climber of all the wildcats. It is a forest dwelling cat. It also has a coat, that resembles cloud formations, which is unrivaled in its beauty. Both its coat and the excessive logging of virgin forests threatens the existence of this species in the wild (considered Vulnerable by the IUCN Red ListTM). This wildcat has two other outstanding features: its tail is very long, nearly as long and head+body combined, and its canine teeth are also exceptionally long at 4 cms.

The clouded leopard is found in Eastern and Southeastern Asia. The scientific name is: Neofelis nebulosa. Its prey both lives in trees (monkeys) and on the ground (deer). This page emphasises conservation, the most important topic for all wildcats. The photographs – except of the Savannah cat – are published under a creative commons license. 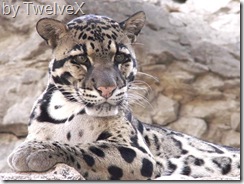 There are in fact two species. The other species Neofelis diardi is thought to be restricted to the islands of Sumatra and Borneo1 while this species, N. nebulosa, occupies mainland Southeast Asia.

The name of N. diardi is “Sunda Clouded Leopard”. Other names for the species found on Borneo and Sumatra are:

Recent uniquely public footage of the Sundaland clouded leopard on Malayasian Borneo is shown below and on this page.

The number of articles about this wildcat and the number of photographs of it are a reflection of how popular this cat is because of its stunning appearance. This really is, possibly, the best looking wildcat, which is why its survival in the wild is endangered

This is not a big cat in the same category as the lions and tigers, the classic big cats. The Clouded leopard is a lot smaller. The best way to show the size is in scale with a person (please see the picture below left).

Compare this with the biggest big cat, the man made hybrid, the Liger

at 900 lbs or one of the the biggest domestic cats, a wild cat hybrid the Savannah at 25 lbs.

Although relatively small, the Clouded leopard is decidedly more muscular than the domestic Savannah, which is the classic difference between domestic and wild cats. 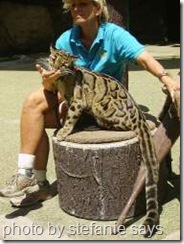 Two particular characteristics of this leopard stand out for me, the very long tail and long canine teeth (at 2″ the longest apparently of all cats – the extinct Saber Tooth tiger had 7″ canine teeth). The Clouded leopard tail is long for a reason; to provide balance whilst climbing trees to hunt prey, which are themselves fantastic climbers such as Gibbons and Macaques. Other prey are a wide range of animals including, small deer, cattle, birds, fish, chicken and squirrels. The tail (as the picture to the right shows) is about the same length as the body. The large paws (see large picture) also help with climbing. It seems that this cat spends a lot of time living in trees and is one of the best climbers amongst cats. It would also seem that a lot of what we know about this cat comes from observation of captive cats.

This wild cat is classified as Vulnerable. The term “vulnerable” means that the Clouded Leopard faces a high risk of extinction in the wild. IUCN criteria sets out to evaluate the risk of extinction of species. As a result of the vulnerability of this animal, trade in body parts is banned under the Convention on International Trade in Endangered Species of Wild Fauna and Flora (CITES). This does not actually stop the trade. It is more a declaration of intent. Enforcement of the ban on hunting and trade is poor.

This cat is highly arboreal. The cat is built to live in the trees. The reasons for this classification are these threats: 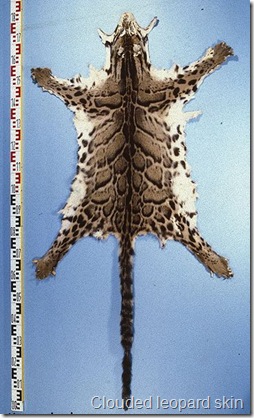 Photo above by Mickey Bohnacker, Presse-Fotograf, Frankfurt/Main. Published under Wikimedia commons license. It is released into the public domain in fact. 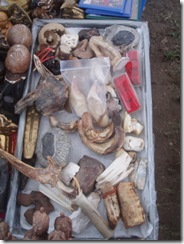 Above – an example of animal body parts for sale – by erik.w.davis (new window).

This Clouded leopard occupies these countries: 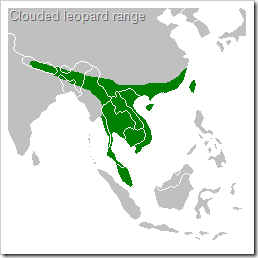 Above – range of Clouded leopard published under a Wikipedia license. The map above gives the impression that the range is unbroken. However, The Red List map is more accurate and shows greater fragmentation. I have prepared a map using Google My Maps that shows the range of both species of clouded leopard:

The picture below is Guizhou in Southern China. There appears to be a lot of deforestation, which is probably the greatest threat to the Clouded Leopards survival. The preferred habitat is subtropical and tropical forest up to 2,000 feet. The other threat is Chinese Medicine

, which I am afraid is a threat to a large number of wild and endangered animals including the Bengal tiger

, as an example only. It really is time the Chinese authorities created laws and regulations to exercise some control over this form of medicine, which is rooted in the past. It promotes illegal hunting of this animal.

This cat prefers closed, primary, tropical, evergreen forest. Although they have been found in logged forest, secondary forest and dry forest. They have also been found to inhabit areas as high as 3,000 meters in the Himalayas and in grassland and mangrove swamps. 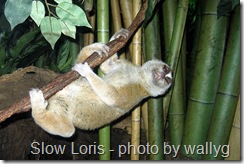 One person who has had absolutely first hand experience of this cat at close range, albeit in a captive environment is Robert Baudy who ran, managed or at least worked at what I believe to be conservation center called the Savage Kingdom. What he describes in respect of the climbing skills is astonishing but it would seem to be predictable. The Clouded leopard is built to climb. It is clearly part of the cat’s makeup and psyche.

On one occasion he recounts the time when one of his Clouded leopards climbed to the top of a 100 foot oak tree in rapid time (in less than a second, he says). When they went to get the cat down safely, this large male simply jumped off and like a flying squirrel glided to the ground, legs outstretched for wind resistance. Once the cat had landed he jumped up and climbed another tree. Robert Baudy makes the important point that in captivity the clouded leopard needs the correct environment, as for example, this cat prefers to consume prey up a tree. It seems that they need to access height. This as we know is a common feature too of the domestic cat but an essential requirement for this species.

They also have, he says, a wide vocabulary using up to 40 different sounds including mimicking other animals such as monkey calls and birds. When he first imported this cat into the USA in the 1960s and 70s the clouded leopard was an extremely rare and valuable cat (in respect of purchase for zoos, the price was about $2,500 at that time). This cat must be rarer in the wild now and calls into question, surely, the IUCN Red List designation of vulnerable.

This wildcat is hard to breed in captivity. There is a tendency for the male to kill the female; hardly conducive to good sexual relations. There would also seem to be issues with maintaining a wide enough gene pool to ensure the health of the captive population and avoid inbreeding depression. What about domestication? The Clouded leopard could be domesticated as its size makes it practical. I couldn’t find specific information but domestication except as mentioned below. It must be happening.

There is apparently a film made by a tourist that has never been released. (see more on this: Public film on clouded leopard – note the video has been pulled from the internet but there is some information on the linked page).

This film has been released by scientists working in the Dermakot Forest Reserve in Malaysia. The Sundaland clouded leopard was discovered to be a distinct species about three years ago. It is one of the least known and elusive of all cat species.

This can also be called the Bornean Clouded leopard and as mentioned above is a separate species. They have been photographed in Borneo’s Sebangua National Park, where they have not been seen before. This cat species has apparently 40 differences to the Asian species and was classified separately in 2007. The Sebangau Felid Project team have made it a top priority to protect this particular cat species and to protect the other Bornean wildcats the leopard cat, marbled cat and flat headed cat. They estimated that there are 10,000 clouded leopards in the wild. Oxford University’s Wildlife Conservation Research Unit is part of the Sebangau Felid Project. 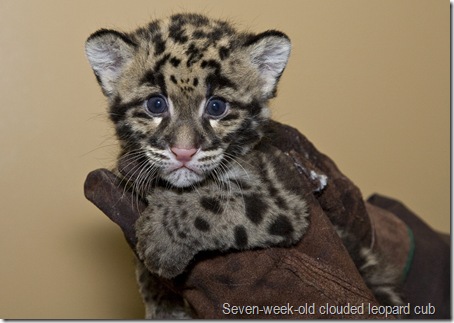 The photograph above is by Mehgan Murphy, Smithsonian’s National Zoo.  The cub is one of two born to Jao Chu and the cubs’ father, two-and-a-half year-old “Hannibal”. They were born in Thailand in a collaborative research program with the Zoological Park Organization of Thailand. The photographs are published under a Attribution-NonCommercial-NoDerivs creative commons License.

Sorry to go on but, as mentioned, a major threat is Chinese Medicine, which I am afraid is a threat to a large number of wild and endangered animals including the Bengal tiger, as an example only. Another is the White Siberian tiger. It really is time the Chinese authorities created laws and regulations to exercise some control over this form of medicine, which is rooted in the past. See Clouded Leopard Population (2010).

First Public Film of Clouded Leopard
13th Feb 2010: This brief post contains a fascinating piece of video that is the first to be made public. There are plenty of still photographs of clouded …

Modern Clouded Leopard Conservation
Is modern clouded leopard conservation gradually confining itself to conservation in captivity? I don’t know but I am beginning to feel that it might be …

References other than stated below: