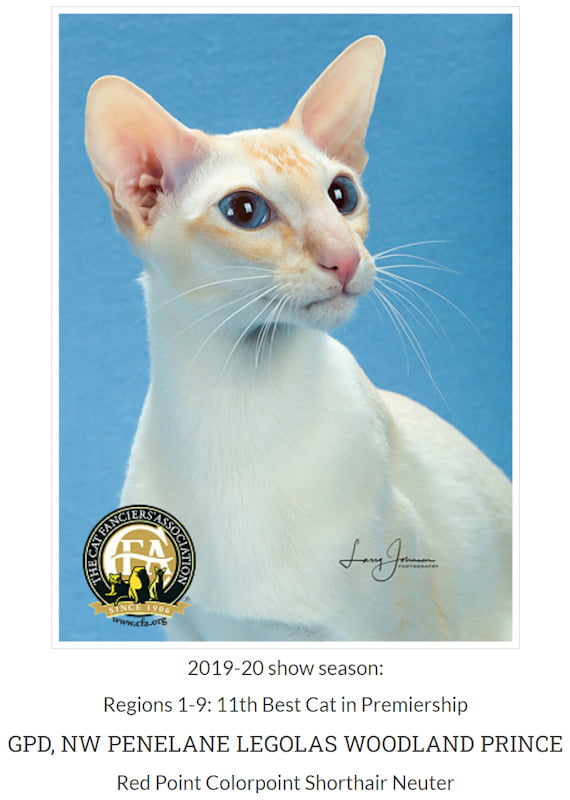 The gist of this introduction, then is that the Colorpoint Shorthair cat is a Siamese cat with these extra colours and patterns (e.g. tabby) at the extremities (points). This means that this cat breed is identical to the contemporary Siamese cat which is known to be slender and elegant with an elongated face. The modern Siamese is bred to extreme in my view. They’ve gone too far. This is another area of discussion which I won’t touch on here but you can see the various types of Siamese cat by clicking on this link.

The next point to make about the Colorpoint Shorthair is that of the three premier cat associations, as I will call them, namely the Cat Fanciers’ Association (CFA), The International Cat Association (TICA) and in England the Governing Council of the Cat Fancy (GCCF), only the first of these three recognise the Colorpoint Shorthair. You won’t see this breed listed in the other two cat associations. Neither does Gloria Stephens mention this breed in her excellent book Legacy of the Cat.

And the CFA state that this is a “man-made breed”. In a woke world perhaps that phrase should be “person-made breed”. And they go on to say that in the 1940s-1950s some breeders wanted to create a Siamese cat with red pointing so they mated a red tabby American shorthair with a seal point Siamese. And so the breed commenced through the creation of a hybrid. Through further selective breeding the CFA advanced the Colorpoint Shorthair to championship status in 1964 with cream and red pointing. Cream is a dilute version of red so cream-pointed cats carry the dilution gene.

And as at today’s date February 28, 2022, the breed includes 16 colours with “body and head type identical to the Siamese” according to the CFA. 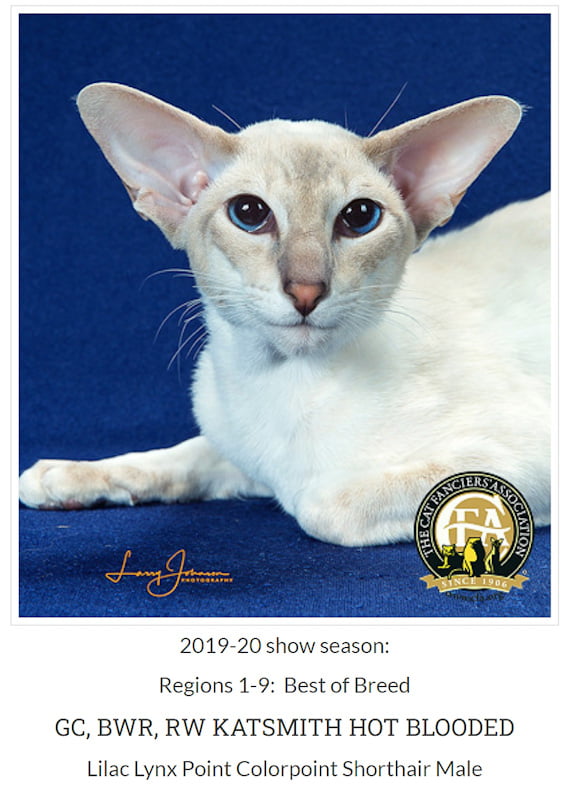 Visit Larry Johnson’s website by clicking on this link.

Dr. Desmond Morris tells me that in the 1960s a breeding programme commenced which was designed to add further colours to the points. They concentrated on tabby points. This is called ‘lynx pointing’ by the cat fancy.

Apparently, you will find at the home of the Siamese cat i.e. Thailand (formerly Siam), lynx pointed Siamese cats at the temples. These would be the original Siamese cats. They are not selectively bred by people but perhaps they are selectively bred by themselves living in colonies. But I don’t think that you will see many Siamese cats at Thai temples nowadays. I have a friend who is Thai and she tells me that she has never seen a Siamese cat at a Thai temple 😢. What happened to them? Although you will see stray cats and dogs. People tend to abandon them there for the monks to care for.

As to character, the Colorpoint Shorthair follows that of the Siamese which is a loyal and affectionate cat, sensitive to their caregiver’s moods and vocal. This is a talkative cat and they have a particular voice which you may have heard. They like attention and vocalise their desires. They are known to be perhaps one of the more intelligent cat breeds although discussing cat intelligence with respect to the cat breeds is a tricky matter.

The cat fancy describes this breed as refined and elegant with long, fine boning and a wedge-shaped head with large, flared ears. The eyes are a deep, vivid blue.

To emphasise the fact that the Colorpoint Shorthair and the Siamese are the same cat except for the colour of the pointing, if a blindfolded person held and touched “a good Siamese and a good Colorpoint”, they would not be able to tell the difference, so say the CFA.

This is a nice picture of a modern chocolate point Saimese cat. One commenter described this cat as 'noble'. I ...
Read More

If you have buried your deceased cats in your back garden and if you are an elderly person who thinks ...
Read More 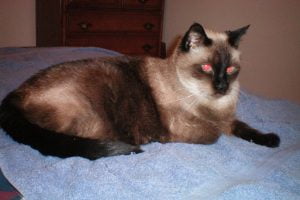 Do Siamese cats become darker as they age?

Yes, Siamese cats become darker as they age. You'll see this in the flanks and central areas of the cat's ...
Read More 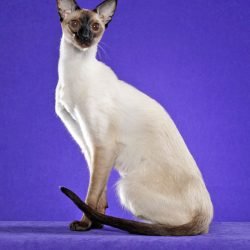