Ivory is a 10 year old, white, domestic shorthaired cat with odd-eye colour. Her right eye is gold coloured and her left eye is yellow-green coloured. Her owner, Gabriela Carvalho, 28, a nursing student, adopted Ivory from the same rescue centre that she adopted her former cat from, whose name was Luna. Luna died of the feline leukaemia virus. 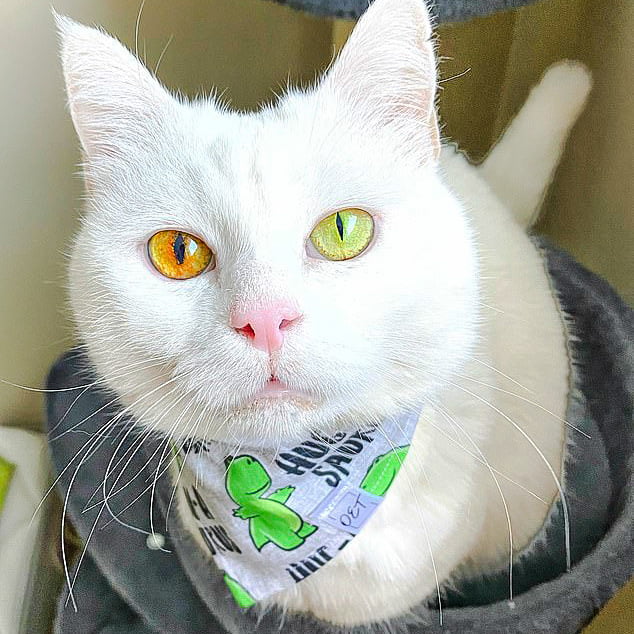 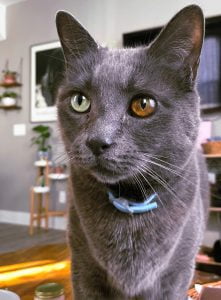 I don't think that I have seen an all-grey cat with odd-eyes before. This picture is on the Reddit.com website ...
Read More
White Maine Coon and heterochromia iridum 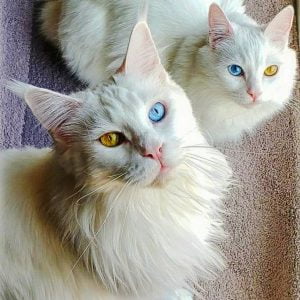 This is a photograph of an all-white Maine Coon cat with heterochromia iridum. In layperson's language, this beautiful cat has ...
Read More
Sansa, a polydactyl, odd-eyed cat with hyperesthesia abandoned by owner 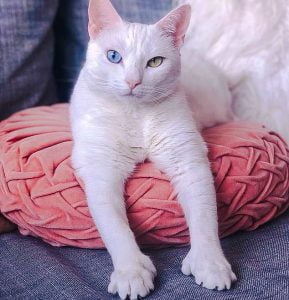 Sansa is a really gorgeous New York City snow-white domestic cat. She is a standout cat not simply because of ...
Read More
When do kittens’ eyes change colour? 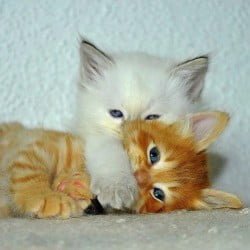 There is physics behind the answer to the question, which may displease some readers and I'll understand why! By six ...
Read More

They live in Calgary, Canada and in the news today is the story that Ivory’s eyes change colour depending upon the weather. The Daily Mail says that the eyes change from bright green and yellow to orange and yellow. The question is whether this is normal. The answer is that it is normal and it happens in people as well.

I have not seen it written about with respect to domestic cats, however, which is why I am writing this article on the subject. Some Internet writers have stated that eye colour can depend upon the mood of the person or animal. This appears to be incorrect and logically it is incorrect but I am open to suggestions from visitors. It is not beyond of possibly that mood can change eye color slightly. Perhaps health might also have an effect but this does no apply to Ivory the cat in question.

Eye colour might change depending upon the ambient light which in turn is dependent upon the weather conditions. And if a cat is indoors the colour temperature of indoor lighting can affect eye colour. The third factor might be objects near the cat which reflect strong colours which in turn alters eye colour subtly. 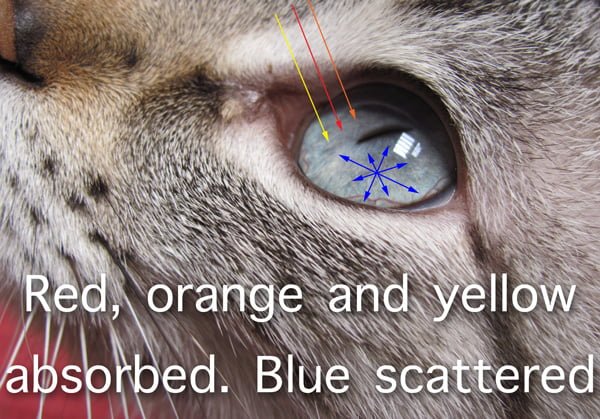 Why kitten eyes are blue. Image: PoC based on a photo in the public domain.

A major influencing factor too is that blue eyes are due to the refraction of light through the eye and not due to pigmentation in the iris of the eye. This immediately allows blue eyes to change colour more easily because if the light source changes the colour temperature it will impact the colour of the eye. As Ivory’s left eye coontains little pigment it is more susceptible to color changes.

Light does have a colour temperature. For example indoor or tungsten light is much warmer than outdoor sunlight which is much bluer. You can see warm artificial light if you have a dimmer switch turned down. Incidentally, blue sky is caused by the same physics i.e. refraction, which causes an eye without pigmentation to be blue.

Ivory appear to have been born with teeth problems. She has some incisor teeth but Gabriela tells us that she has very few teeth. This results in her sticking her tongue out sometimes. She also has a unique purr. Gabriela wasn’t intending to adopt but she was struck by Ivory’s adorable appearance when she passed by a window. She asked the shelter whether she could meet Ivory in the “meet and greet” area.

Ivory actually adopted Gabriela because when she met Ivory, “Ivory came out, walked over to me laid right in my lap and started purring, and she purrs loud and like a pigeon”. That’s an example of a cat adopting a person and you can’t resist.