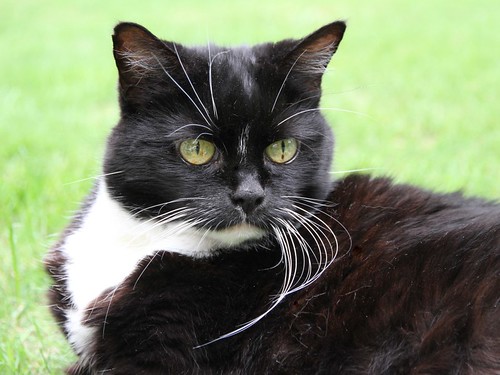 She suffered from the most common cat illness until I fed her cooked fish with added water (see below).

The most common illness to befall the domestic cat is a Urinary Tract Infection. The next nine most common cat illnesses are in descending order:

This data comes from Veterinary Pet Insurance figures. It is a neat way of analyzing cat illness. The number of claims that are made under pet insurance schemes for certain illnesses informs us as to their prevalence.

The figures relate to 2007 but I would doubt if things have changed substantially since.

I am not going to stick my neck out too far but some people would argue that the most common cat illness is caused in part, at least, by convenience cat food – namely dry cat food. If this is provided (as suggested by some vets) as an exclusive cat food it can exacerbate urinary tract problems. Cats don’t drink much water normally, probably because in the wild they get it from the body of the prey. If the food is dessicated the cat may not fully compensate for the lack of water by drinking more.

For instance: some time ago I took the simple step of providing microwaved frozen raw fish with a bit of added water to my cat who had developed a propensity to develop urinary tract infections. That completely solved the problem in one easy step. The extra water kept her tract flushed out preventing the formation of crystals etc.

No doubt the first and best step in preventing UTIs is to look at the easiest and simplest action: reflect on diet. Stress, too, can be an underlying cause of urinary tract disease. Cats left alone can cause stress – separation anxiety.

Far from me to comment, not being medically qualified, but a good number of these diseases could be related to diet. They say diabetes can be caused by being overweight. But other vets say it can be caused by commercial cat food. Allergies can also be caused by food.

Chronic renal failure seems to be a common cause of death in older cats. Perhaps cats are living longer – elderly cat health problems. Hyperthyroidism is more common in older cats too.

I think that it is useful to know the most common illness as it should encourage us to focus on preventing it. And as I said, diet is probably the first port of call.

See links to information about all these diseases on cat health problems.

Home made cat food – if done with care and well it is the best but some vets (all vets?) criticize it as a potential source of illness as it is made from raw. Raw food needs to be handled carefully – for instance: Toxoplasmosis – its prevention.