There is a trailer park in Lebanon County, PA. It’s called the Bunker Hill Trailer Park in Swatara Township. They have their community cats. A kind and generously sensitive lady looks after the cats and she is going through torment and emotional agony because an ‘evil jerk’ on the estate is trapping and allegedly shooting them. The cats disappear and the lady, Camille Granadas, hears muffled gunshots as if in a barn some distance away.

RIP Mr. D White – “Another victim of the trap and destroy and trap and dump efforts by the evil people of lot 7 and the heartless park owners.”

“We believe we hear gun shots over here, that the property owners might shoot the cats. And the reason I think that is because I had a conversation with the property owner in 2014 where he said that right to my face,” said Granadas.

She thinks that the ‘evil jerk’, Rodney Noecker, traps them and then takes them away to shoot them or someone else does it. Noeker claims that there is cat poop everywhere and he can’t have a picnic when his grandchildren visit. He claims there are too many cats. He has a trap on his porch and has placed one under a bird feeder. Camille spends a lot of time on surveillance in an effort to prevent more of the cats, that she has so sweetly cares for, disappearing. It’s a wearying mission.

“I feel like I’m going to go insane from the heart ache and constant stress I’m under. The assigned officer [police officer assigned to the case] has not even talked to them yet!” (Camille Granadas) 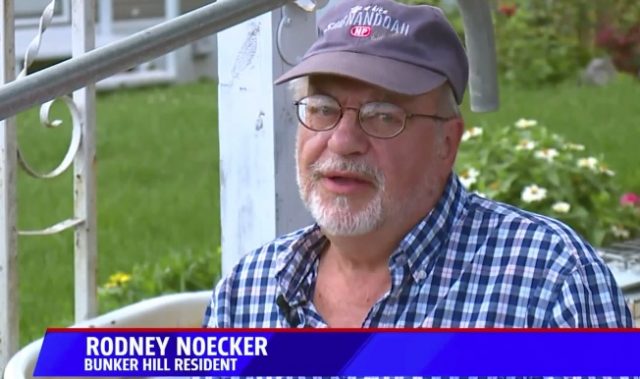 One minute the cats are there sunning themselves and the next they are gone never to be seen again. The cats of Bunker Hill have their own Facebook page: Bunker Hill Cats which is ‘dedicated to the precious cats in the Bunker Hill/Jonestown PA area’. Camille’s emotional distress is evident in each post she writes.

Camille has become so distraught that she has used her best efforts to seek help and received it in the form of Alley Cat Allies to relocate the remaining cats. There are plans afoot to get the cats away from area and have started a Go Fund Me page to raise some funds for it. She can’t disclose what’s happening. This is to protect the cats I believe because you can never be too careful with cat shooters.

The police have been informed about the disappearing cats but unsurprisingly they show scant regard for the cats’ welfare and want little or nothing to do with it. Camille thinks it was bad luck she got a police officer who didn’t care about cat welfare. I suspect there are others in the force with the same point of view.

Noecker said that he has permission from the trailer park owner to trap the cats. He seems to dislike the cats as much as Noecker. He says that he relocates the trapped cats to farms but refuses to say where they are. He was specifically asked by Fox 43.

Camille is also leaving the area and wants until the end of September to get the cats out of what has become a very hostile and dangerous area for them.

Having got the help of Alley Cat Allies, Camille feels a bit better because although she is ‘haunted by the fact that I could not protect the ones I lost’ she can see a way forward to protect the remaining community cats.

Interestingly Camille took the arrival of a large dragon fly while she was doing surveillance as a sign that things would get better and they did in the help offered by Alley Cat Allies.