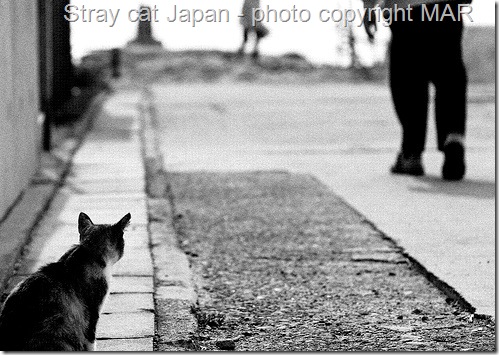 When I read the news items from the USA there is some pretty heavy and highly confused, angry, passionate, good, bad and indifferent comment about how to deal with the feral cat problem.

There appears to be several well polarised camps. The first group are the sane ones, the good ones but they are the p*ss*d off ones. They are peeed off with the bad ones.

The good ones realise that the feral cat problem is our problem and in order to solve it in the long term the authorities and ultimately the people of America will have to change their attitude towards cats, keeping cats that is. They say that the feral cat should be treated humanely and TNR is the only route despite many who also say that TNR does not work and the only way to deal with feral cats is to kill ‘em anyway possible, which also doesn’t work because new feral cats fill the vacated space. Maybe they just plain like to kill ‘em. It gets something (probably anger at the world) out of their system.

Others see the feral cat as a wild animal, which it technically is and so it should be treated like all wild animals. Does that mean shooting it? I am confused about feral cats.

Others say the feral cat kills billions of birds etc. etc… And in order to preserve native species the pest of the feral cat must be wiped out. But how? They don’t know. And they don’t know if what they say is true (about birds being killed). The just like to spout it out, the sound bites. But there is no certain evidence that feral cats or domestic cats or both do have a significant impact on wildlife. One thing is certain though. Humans kill far more wildlife that cats and we have been doing that for a long time and sometimes we do it directly and deliberately like shoot ‘em. Other times it is indirect like building roads that end up killing cougars for example (in Florida).

It is no wonder I am confused about feral cats. When the only humane system of controlling feral cats, TNR is said to be a failure what is there left to do? The only route is to bite the bullet and force people to care for their cats more responsibly.

There is one more confusing aspect about all this. Some other groups say that the domestic cat must be kept indoors full-time all the time all over the USA. That would solve the feral cat problem eventually. Yet cats that are neutered if let out cannot create a greater feral cat problem as all they can be is a stray cat and if cared for properly will never stray from a good home. It comes back to good cat keeping, responsible cat keeping.  I also personally hate the idea of banging up cats for their entire lives. I know it is safe for the cats but is a safe boring, dull life better than an exciting, natural but shorter one? I don’t know but I like natural things and methods. Anyway we made the world so dangerous for our cats. It all comes back to us. We run the world. No we don’t, it is chaos. Am I confused about feral cats? Maybe not.

Maybe there is just a lot of confused commentary and comment. One thing for sure is that there are a lot of people who act irresponsibly and it comes all the way down from the top.

We have a social contract with the cat. A social contract is an unwritten contract that we care for the cat and the cat helps us – a good deal. People are often in breach of that contract and it is time that a proper approach to the problem was commenced with enforceable legislation. It won’t happen, the recession has seen to that. We are too busy surviving ourselves to care about the odd mangy feral cat that is being trapped, poisoned or shot at.

The ones who shoot ‘em hate ‘em. I love feral cats. I feel for feral cats. It makes me sad thinking about them. They don’t deserve to be in the position that they are in. We put them there. We are at fault. We are the bad ones. Punish us not the innocents.

Note about the picture: MAR has given me permission to publish his stray cat photos. Stray cat in this sense also means feral cats.