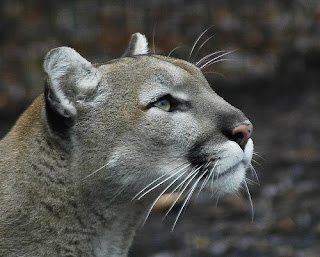 There is a nice story in the Huffington Post about insights into cougar behavior. Its actually about cougar and human behavior. Scientists were researching interaction between so called solitary cougars. They had labeled the cougars with numbers like F1 and F27. F1 may have been the mother of F27. F1 was shot by a sport hunter. Her death is described as “part of the legal take of the winter hunting season.” It is legal to shoot the relatively rare cougar in northwestern Wyoming (although it is certified as Least Concern – LC – under IUCN Red List, but I have doubts about IUCN Red List). In shooting this female, 3 young cubs of 14 months of age lost their mother. A cruel act, one could argue, that was perpetrated for the pleasure of a solitary human individual. But they are only wild cats, after all.

Under state statutes a cub over one year of age is considered independent but the fact is that cougar kittens stay with mother until about 20 months. It seems that the state statutes might be a little inaccurate. Looks like another human wrong to me. The winter was coming and there would seem to have been a chance that these three kittens could have starved and perished. It would have been illegal under the state research permit for the scientists to step in and help. I guess another negative spin off from the inaccurate statute, another wrong?

Another neighboring cougar called F27 took the cubs in and let them eat her kill despite the fact that she had 2 young cubs of her own aged about 5 months. This clearly put a strain on her but she rose to the challenge, instinctively helping what may have been her mother’s offspring. It may have been a family thing and if the orphaned cubs were not related to her then it was an act of pure altruism. However you look at it, she did well. She did the right thing and we did the wrong thing, twice, three times?

Make your own mind up as to which animal is better. See Wild Cougar and Florida Cougar. This is the original article.

Photo: this fine looking cougar is not connected to this post on cougar and human behavior. It is by one of the best wildlife photographers: ucumari