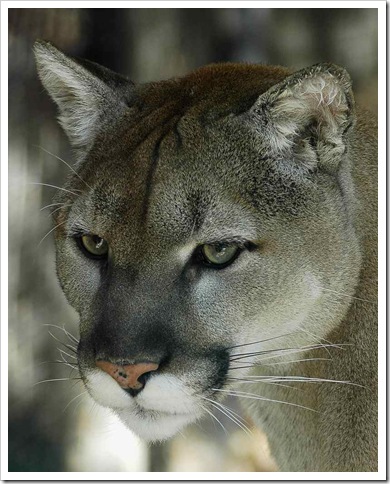 Cougar pictures – Photo by ucumari (new window). This Flickr photographer has taken the best pictures of this cat on the internet that were captive cats. His pictures are so perfect I ask if there has been some digital manipulation to smooth things out. I mention this because there is a serious side to taking pictures of wildlife. What I mean is does the photograph reflect the truth? And that is not to criticize this fine photographer. It is just that there are ethical issues to deal with in wildlife photography.

Note: These picture are generally thumbnails and you can see them in larger format (sometimes!) by clicking on them.

You probably know that cougar pictures are also puma pictures, which are also mountain lion pictures and panther pictures, painter pictures…..point made. This cat has many names, more than I have mentioned (see Puma Cat the Namefor more)

Pictures of cougars have got to be from one of two places, captivity or the wild (is there a third place: game farm photography? – see below). As this is a very secretive wild cat pictures taken in the wild are often camera trap pictures or lucky grab shots. Often the quality is less good for these reasons. Often the quality aesthetically speaking is plain poor but rich in truthful information. However, cougar pictures taken at zoos can be stunning. I select one or two from the best photographers. 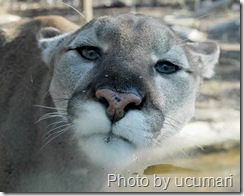 Ucumari says this about the picture left:

He was pacing back and forth and I was following him trying to get a shot without a glare.

He suddenly stopped, came right up to the glass and just stared at me for a few seconds.

This is the same cat as the one heading the page. You can tell by the black markings on the nose. 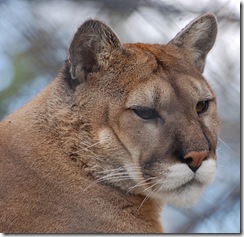 Left – Photo by digitalART2 – this is another super high quality animal photographer of captive animals.

What about wild cougar pictures? Here is one that is very rare indeed: 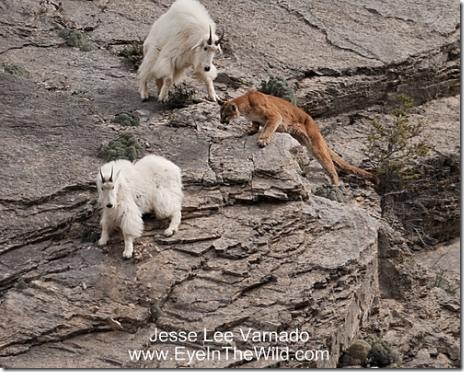 Bang in the middle of an attack on two white goats! See the photographer’s comments on this page: Mountain lion attack. This is the real thing as far as I am aware.

Next are some camera trap photos. These are real life situations too. Cougars are elusive and camera traps (cameras that fire off automatically when there is movement in front of the camera) are one way to capture cougar pictures that are authentic.

The above picture and the following text are published under Attribution-Noncommercial-No Derivative Works 3.0 Unported creative commons license. The photographer is Chris Wemmer (new window). He says this about the photo:

“This mountain lion wasn’t cooperative. The fox and bobcat at least climbed up on the rock, and other mountain lions I have photographed have done the same on other rocks. But not this time. I had 3 cameras out this last week, and two out of three had mountain lion pictures. This cat spent nearly 4 minutes at the site, but I got only 5 pictures. The camera was cabled to a crooked bay sapling and pointed up a bit too much — not ideally aimed for a cat standing in front of the rock. (I corrected that today). ”

“I used artificial civetone as a scent lure, and I imagine that’s what the cat is licking. It came at 5:17 PM the day after I visited the set and put out the lure.”

I think the one below was taken in California, USA. 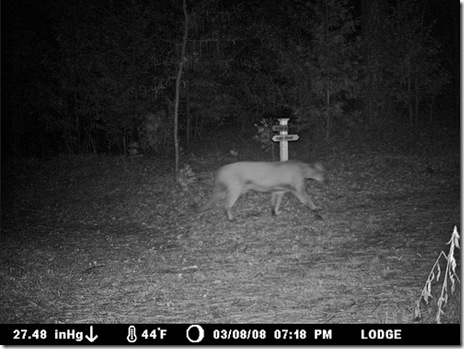 This is a camera trap photo arranged by Flickr photographer by randomtruth (new window) and published under an Attribution-Non-Commercial-Share Alike 2.0 Generic creative commons license. He says this about the photo:

“……….looks to be over 24″ at the shoulder and probably 120-130 lbs. Wow. Taken at night with my Moultrie game camera and infrared flash. This was taken 10 miles outside of Mariposa, CA, and about 7 miles from the edge of Yosemite (as the crow flies – not by road). And, gulp, not far from the house.”

As mentioned, the above two cougar pictures lack the stunning quality of the captive cat photographs for the obvious reason that they are camera traps for the reason that composition and the quality of the light are factors that are relegated to a minor role when actually seeing a cougar within range to be photographed is a major success.

That is where the dubious business of game farm photography comes in to play. Game farm photography is an engineered environment where photographers can take wildlife photographs that are better composed and better lit and which look like the animal is wild and in the wild. The animals are wild but they are often kept in cruel, cramped conditions. Business is not expected to spend money on creating excellent conditions as it undermines profit. Accordingly photographs taken under these conditions can:

Wildlife photographers are seeking the truth. There has to be an old fashioned photojournalistic approach to wildlife photography that totally precludes photo manipulation and set ups. This makes it mighty difficult to capture a fine looking photograph. A lot of cougars are killed by cars trying to cross busy roads as they seek a new home range. These might be young cougars who die young: 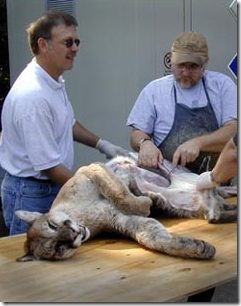 This is not one of those pretty cougar pictures but a very accurate one. Is accuracy more important than aesthetics? Yes, if the animal is endangered or in the case of the Florida panther, critically endangered. At that point in time pure facts are the most important thing. Beautiful pictures become almost irrelevant as much of what goes on in respect of the endangered species is not that beautiful.

Picture left: A young cougar killed in Missouri crossing the road and being cut open for research reasons.

I don’t have permission to publish this photo here but argue fair use and provide a link by way of thanks,

These sorts of cougar pictures are really more valuable than the pretty manipulated ones taken at zoos. And please don’t take that the wrong way. I am just saying that matters of life, death and extinction in the wild are more important than the appearance of the animal and in any case the cougar doesn’t care what (s)he looks like.

Now back to a couple more interesting cougar pictures — but first cougar scat!!: 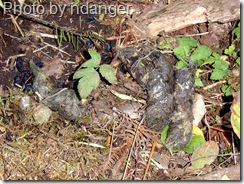 “Scat” is a scientific word for sh*t! (in this context – it means lots of other things too). Maybe this photo is useful. If you see it in the wild maybe you should take precautions against a possible mountain lion attack that precludes the need for violence against the cat. Also an avoided attack saves the cougar as the police or some other government body invariably shoot the poor animal afterwards. An avoided attack saves pumas as well as avoiding injury to ourselves. 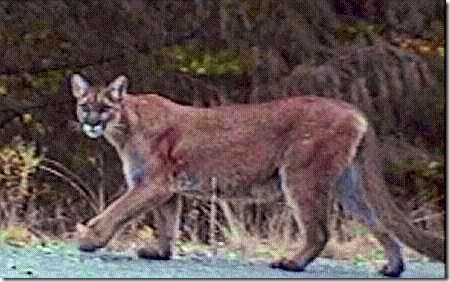 Photo by Beyond the Trail [Gary] (new window). This is one of those cougar pictures that is particularly interesting because it was taken in 1994 with an 8 mm format movie camera (hence the poor image quality of this still from the movie) and the cat is very close to the film maker. Indeed the cat is looking at Gary as he films, totally unperturbed. This cougar must be relaxed in human company, which could have been be dangerous for it (it will be dead by now) as some people like to kill these animals for the pleasure of it. This is what Gary says about the encounter (I don’t think he will mind me quoting him as it is interesting:

“Oct. 25, 1994 — while filming fall colors (Sony 8mm Handycam) on a remote mountain road in Trinity County, California — heard a cat yowling. A few minutes later this mountain lion came padding into view around a curve in the road. The cat saw me instantly — I was in plain sight — and immediately stopped yowling — but — to my complete astonishment — kept coming. I stood on one side of the dirt road (filming all the time) as the cat sauntered past me on the other side. We made eye contact briefly a couple of times. [I wasn’t in complete shock — OK maybe I was — but mostly — was totally in awe!!] The cat continued on about 20 yards or so beyond where I was — and then casually cut off the road — still without any visible sign of haste — disappeared from view over the road bank. [With the video — I was able to capture some of the cat’s yowling.] Have had my share of wildlife encounters over the years — look on each as a blessing and a privilege — but must say — this was the most Exhilarating — left me walking on air for days!! And I kid you not!!!! BTW — notice the cat’s wet pads — obviously had been wading in the nearby creek.”

You can sense the closeness, the reality, the animal. These are the best cougar pictures. The same applies to this final picture taken by a camera trap but nicely framed. The cougar looks very fit, proud and independent. Its right eye reflects the flash light. 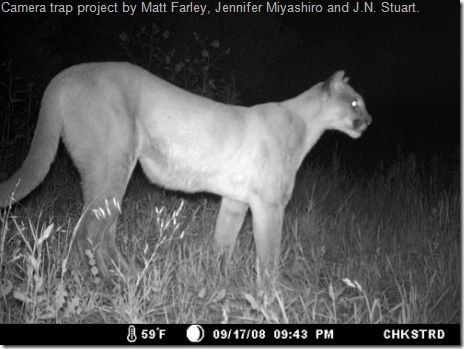 As can be seen by these wide ranging cougar pictures the puma is a large cat but much smaller than the classic big cats and can in fact be quite small. Indeed they resemble the smaller cats in that they can’t roar (see Mountain Lion Sounds) because their skull shape is like that of a small cat and the larynx not designed for the job (see Tiger Roar). The puma resembles the cheetah more than the classic big cats with a smallish head, slim rangy body and longish limbs. It is, though, the largest North American cat. The long limbs make this cat a truly excellent jumper and capable of energetic bursts of speed.

The largest specimen was probably about 125 kg, while in the equatorial rainforests of Peru adult males weigh a mere 28-30 kg. In Canada an adult male can weigh 85 kg. The puma is plain coloured cat with a range of colours from grey to dark brown with shades of tawny, buff and cinnamon red (src: Wild Cats of the World). The underside of the cats are whitish. People have claimed to see and shoot black panthers or melanistic pumas. Although the term “black panther” is normally used for melanistic jaguars and leopards.

The cougar pictures on this page show the long tail (probably for balance) and the facial markings.

More reading/viewing on the cougar: