Doug Giddings, the Idaho County Sheriff protected the cat shooter, Jesse Winterringer, who likes to shoot cats, any cats, feral or domestic. He does not mind. Sheriff Giddings shows no interest in investigating Jesse Winterringer’s perverted taste in entertainment in shooting cats he describes as “Ferrell” despite the fact that some of these cats are probably domesticated and pets.

The Idahoan Dumbass Redneck Who Likes To Shoot Feral Cats

This should not surprise people because Sheriff Giddings shows a disdain for the animal welfare laws of the county, state and nation. Perhaps it is pure ignorance of the laws or contempt for them. It looks like it. He is one of those law enforcement officers: biased and unbalanced.

In a well publicized story about a dog, Tharros, the sheriff sided with Jesse Winterringer in claiming the dog had been attacked by a guard dog when in fact the dog had been shot by his owner, Winterringer. Winterringer claimed he decided to euthanize his dog with a bullet because he was wounded. A passerby saw him struggle to hold the dog while trying to shoot him. It seems he shot inaccurately and severely injured the dog who was rescued and is now re-homed. As I understand it Winterringer simply want to ‘euthanize’ (aka kill) his dog. There was no injury.

Sherrif Giddings changed his tune when confronted with overwhelming veterinary evidence that the dog had been shot (bullet fragments in the jaw). Giddings then proclaimed that:

“If you injure a dog, or you want to shoot your dog here, you shoot it..In the city you take it to the pound, they euthanize it. What’s the difference?”

“There was nothing done that we can tell that was illegal, dishonest, immoral or unethical and it definitely was nothing criminal,” Giddings said.

Well Mr Giddings the difference is that euthanasia is legal and humane when done by a qualified person for legitimate reasons while shooting and injuring your dog in an attempt to euthanize him/her is probably and should be a crime under Idaho code title 25. It would be a misdemeanor.

I want to briefly point out the law in Idaho on animal cruelty:

‘Cruel’ means to subject an animal to needless suffering or to intentionally inflict pain and physical suffering injury of death upon an animal. Surely Winterringer is guilty under this definition in shooting his dog and the cats.

Sheriff Is An Apologist For Animal Abusers

The point I want to make is that the county Sheriff protected the cat shooter, Winterringer in what must be a crime in shooting his dog and he ignores the ongoing crimes perpetrated by Winterringer in shooting cats wherever he finds them notwithstanding that they might be someone’s pet. Indeed in one self-published photo of him holding up two dead cats you can see a collar around the one in his left hand.

He got 2 that night. He is in his garage. Are these domestic cats? See a collar on the cat in his right hand.

Giddings continues to defend his perverse attitude to animal welfare. He said:

“I can guarantee you that person believes in abortion, but they care more about dogs than they do babies…”

He’s trying to defend his attitude with a poor argument. The truth is that the County Sheriff protected the cat shooter Winterringer. He is therefore unsuited to the role as he disdainfully ignores animal welfare laws and protects an alleged criminal. He has possibly committed a crime himself: misconduct in public office.

Note: Jenna Lynn’s review is my source for the dog story.

Is it legal to own a rusty-spotted cat?

The thought of owing a rusty-spotted cat is quite popular judging by the Google searches: The answer depends on where ...
Read More 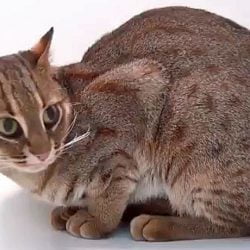 This is an unusual, short video of a rusty-spotted cat in what appears to be a photographic studio. This species ...
Read More 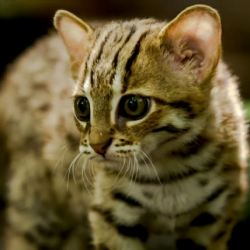 Can you domesticate a rusty-spotted cat?

Yes, you can domesticate the rusty-spotted cat to a certain extent or you can tame it according to two naturalists ...
Read More

What does the rusty-spotted cat eat?

The rusty-spotted cat is the world's smallest cat and certainly the smallest wild cat. It is very cute looking but ...
Read More

The range (distribution) of this very small wild cat is mapped out below. This is an emebedded map. The original ...
Read More