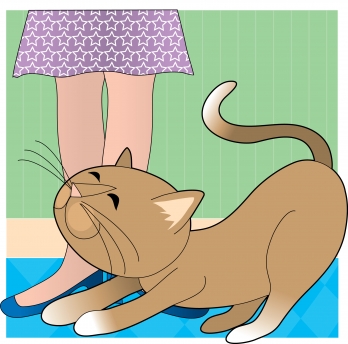 You don't have to be a crazy cat lady to live with more than one cat. And you don't have to be "crazy, old, lonely or smelly" either! There is a bit of a stereotypical image of a lonely old lady in a messy home with lots of cats. This might come from the not too infrequent stories of cat hoarders who seem more often to be women.

Of course the stereotype is completely incorrect but there is a little bit of underlying truth.

To the ladies who care for cats and who visit this site. You are anything but crazy.

And I am treading very gently here to avoid the risk of upsetting the fantastic lady contributors to this site. But I like to write about this subject on occasion because it looks at us as well as the cat.

The fact (is it fact? not sure) that more women prefer cats might also be supported by the argument that women are more predisposed towards caring roles (is that fair?) and cats need our devoted care!

It also might be that women are in very general terms more in touch with nature or more concerned about it on the basis that men are more likely to use nature to achieve personal goals rather than work within it. The slash and burn male against the nurturing female.

Of course these are generalisations and I am one example of a man who loves cats and keeps more than one. And so is Finn Frode in Denmark. There are millions of others.

That said, when you go to a cat show you can see the exact percentage of women to men who are involved in the cat fancy, the sharp end of the cat world. I haven't conducted a survey but I would say it is about 80% women to 20% men (as a bit of a guess).

What prompted me to write this was a story about a United States army specialist (Army Spc. Nathan Davis) who won a prize for a short piece he wrote about his two cats. He is the archetypal army team player in his combat uniform and he has two rescue cats that he adores. Wonderful.

The world is a bit too fast in pigeon holing events and people. If there are old, crazy cat ladies out there it is completely natural and to be expected. Sometimes the idea of the crazy cat lady is used I feel by people who have a tendency towards misogyny.

Women live longer than men. They don't won't to start a new relationship when the husband dies. They like cats. Cats keep them company and vice-versa. What it wrong with that? And I am sure that they are completely sane. It is the world that is crazy not the little old lady.