I feel justified in criticising the The San Francisco SPCA. They are sitting on the fence big time when it comes to declawing. Declawing is the one subject that requires nothing less than total commitment to stop it and to fight off the wealthy veterinary associations who have become wealthy on the back of the obvious cruelty of declawing. 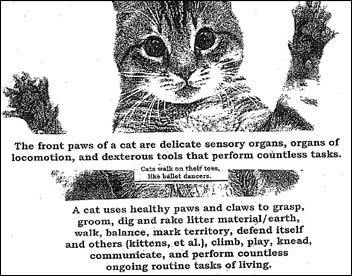 The AVMA and the California Veterinary Medical Association (CVMA) are fighting a vigorous campaign on all levels to retain the right to assault cats for no good reason (other than to make bucks for their members and themselves).

The San Francisco SPCA make a “position statement” on their website. If this is a statement intended to declare their position on declawing, I am still wandering around with a map trying to locate it.

I am criticising the The San Francisco SPCA because they are ambivalent on the issue of declawing. This is not a time for ambivalence. And you know what, I just wonder whether they are being influenced by the AVMA. It would not be beyond the bounds of anyone’s imagination to think that AVMA funds the San Francisco SPCA and if that is the case is this the reason why they are shamelessly sitting on the fence? I allege that this could be the case.

The San Francisco SPCA say that they are against declawing. Yet they are also against a ban. Come on! They know that veterinarians cannot be trusted to make proper judgements on the matter of declawing and which are in the interests of the cat. History bears that out very plainly. Millions of cats have been assaulted unnecessarily over the years all because a vet has sold the idea to cat keepers that it is acceptable.

The only way to stop them is to ban it. Declawing is not something that can be left in the hands of a vet. You wouldn’t go to the Iranian government and ask for their advice on the democratic process would you? You would expect a fair trial in Burma would you? So never expect an American vet to provide advice on declawing that is in compliance with their oath or that is morally justified. It doesn’t happen.

For that reason The San Francisco SPCA is wrong when they are saying that declawing should be left in the hands of vets, which is what they are in effect saying.

They justify their hopeless decision by saying that declawing is a way of stopping abandonment of cats. That is poor thinking. Firstly declawing is often a cause of abandonment – the exact opposite. Secondly, if a person who keeps a cat wants to abandon the cat because of its claws the solution is not to brutally assault the innocent cat but to train the person (not the cat incidentally) in how to care for a cat; an animal that has claws that are a vital part of its anatomy.

The San Francisco SPCA have hopelessly missed the fundamental issues and for that reason I am criticising them.

From Criticising the The San Francisco SPCA to Declawing Cats