Here are two interesting instances when smart birds – in these cases crows and a woodpecker – took revenge on cats. The smart birds are part of the crow family (corvids) which includes . The woodpecker is part of the family Picidae. 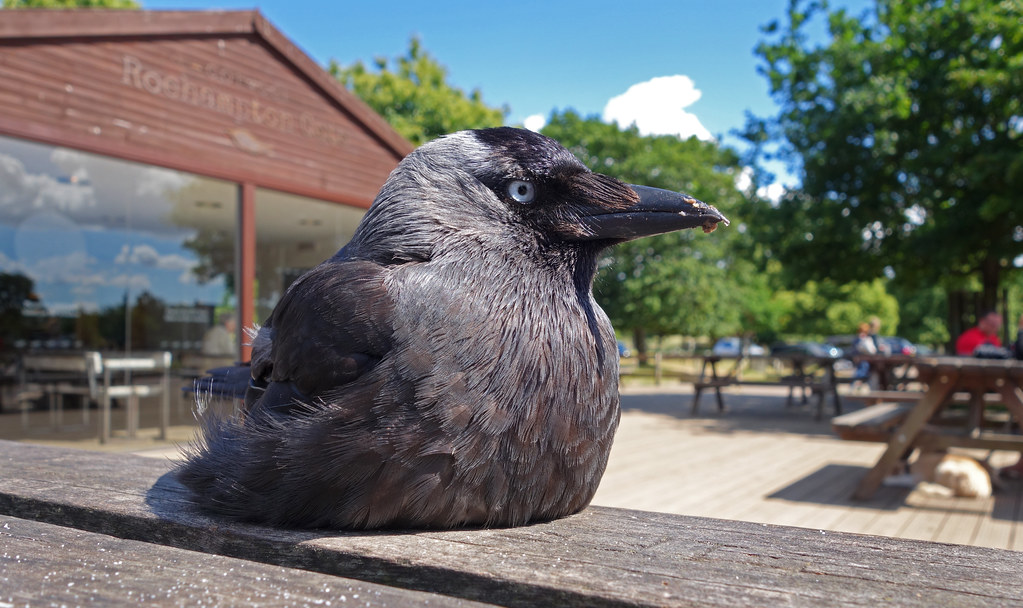 The picture above is a jackdaw taken by me in Richmond Park, Surrey, UK. The jackdaw is a member of the crow family.

In the first story a woman’s cat injured a crow while playing. She says the crow’s friends now want revenge and retribution. They pee on her house and have ‘put the crow outside. They’ve also showed us the injured crow so that we can give them the cat…’

She believes that the crows want her to offer up her cat to them so they can exact revenge and retribution on the cat. This story encouraged others to come forward with some remarkable examples of birds taking revenge on cats and people.

One of these stories concerns a woodpecker which I understand is considered a smart bird. A black cat called Eclipse attacked a red-headed woodpecker. The cat’s owner saved the bird and took it to a wildlife sanctuary where it was nursed back to health. They released the bird in the cat owner’s backyard so that it could return to its territory.

Whenever Eclipse was out in the yard, the woodpecker would dive bomb him. Eclipse became fearful and slinked across the grass. In the end the cat moved away from the yard to a house across the street. The woodpecker drove the cat away from his territory. The woodpecker had successful taken revenge for trying to kill him.

Smart birds don’t just take revenge on cats. It happens to people too and it goes on for decades! In this story Fran Wisniowski said that when she was a child a neighbour of hers killed a crow by throwing a rock at it.

The other crows gathered en masse. “You couldn’t see his grass, roof or trees for all the crows”. The crows watched the crow killer’s home and made a huge amount of noise. They also defecated on all surfaces until the crow killer buried the crow he had killed.

To the exact day, the army of crows returned the next year and spent a week harassing him. This pattern of revenge went on for 25+ years and continues today. The ‘order’ to harass the crow killer has been handed down to a new generation of crows.

I had never realised that smart birds took revenge on what they perceive to be ‘hostiles’. It makes sense. We shouldn’t underestimate the intelligence of animals particularly the smart birds.

What to do to stop the revenge of the crows?

I shall take the advice of Donna Nagel who has observed and studied crows for years. She says that you should slowly approach vexed crows and talk to them. Apologise to them. Speak gently. Then place food out for them and leave quietly. The food should be meat, cheese and pieces of fresh fruit. You should do this regularly. This will restore peaceful relations with your hostile crows. You may even make friends with a couple who you can employ to keep away unwanted pests. The advice seems far fetched and fanciful but what do I know?

Comments from bird lovers are welcome but make them polite please and no trolls.