We've all heard the saying 'curiosity killed the cat', it's a simple saying which describes our curious companions. But you would never have expected this saying to be warped into the name of a sick ill humoured poison which is designed for one purpose: to slaughter cats.

'Curiosity' is so degrading to cats, and in my opinion it's extremely offensive to any and all cat lovers. It does offend me, and it brings a lot of shame upon me, as a Tasmanian, as it was made to kill cats on an island just off Tasmania, which goes by the name of 'Tasman Island'.

How, may you ask, did the cats get to Tasman Island in the first place? Well, the island was used for light houses, and light house keepers took their families to live on the island, and with the families came their pets. There has been no people living on Tasman Island for about 30 years (or so I've heard) but it has been home to many feral cats, which were left behind by humans to breed and populate. There are currently approximately 150 feral cats on the island.

These cats have been slaughtering the native birds which live on the island, which makes perfect sense. Cats aren't going to starve to death to preserve the native fauna on the island... Their aim is to survive.

So, scientists (or whoever it is who makes these poisons) have created this poison and have designed it to kill 'pests' such as rabbits and rats, but mainly cats... What they do is put the poison on meat and leave it in traps. The curious cats enter the traps and consume the meat which is contaminated with the poison 'Curiosity', 'Curiosity' then kills the cat...

These cats were put on the island by people, then abandoned and left to fend for themselves to later be slaughtered by people... It's so shallow, just kill off the homeless because they're acting as a somewhat burden... To everyone out there who owns a cat that was previously feral, think about this and how they're killing cats that are just like yours and mine...

Hi Maggie... Thanks for this story, which is close to my heart. The feral cats on Tasmanian islands are often cited by "experts" as examples of how cats kill wildlife and how dangerous they are to native species.

But as you say (and I am completely in tune with you on this subject) we introduced the cats and we abandoned the cats and then we bloody well kill the cats - a complete screw up. Do we do anything that is correct and proper? It is so typical of the worst of humankind's nature - narrow minded and arrogant. The cats are simply surviving as you say.

People kill far more species of animal than all the other animals put together. But do we do anything about that? Very little indeed.

The wild cat species are gradually being hounded off the planet. It is said that the tiger could be extinct in the wild in 5 years! 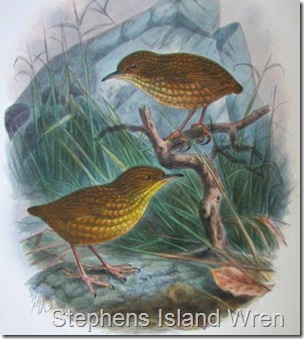 There was a story that a single cat who I think was called "Tibbles" killed an entire species of bird, the Stephens Island Wren on Stephens Island, which is part of Queensland, Australia and just south of Papua New Guinea as far as I am aware.

It is well documented but highly exaggerated. Tibbles seems to have existed and he caught and brought back the wren to the lighthouse keeper who recognised the importance of it as a possible new species.

The lighthouse keeper keep a cat or cats and a pregnant female went wandering and created feral cats and bingo, they killed all the wrens on the island. As they were flightless birds this was not difficult.

As the bird was only found on this single island it became extinct.

The root cause was us. The cats were simply acting naturally and predictably.

There are many examples of whole cat colonies on islands being exterminated by "experts" to protect sea birds and native wildlife.

I just find the whole thing sickening as it is yet another example of how we screw up. Birds are important, yes, of course. But so is all life. Is a cat less important than a bird?