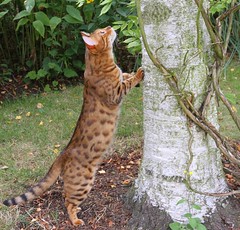 Cushing’s disease in cats1 or hyperadrenocorticism is an endocrine disorder (endocrine system secretes hormones) so it is an imbalance of hormones in the body. As this disorder is not listed as “Cushing’s disease” in the premier book on cat health and medicine it must be rare: Cat Owner’s Home Veterinary Handbook, Fully Revised and Updated

. In that book there is a short section on cortisone excess (adrenal hyperfunction). The authors say it is “extremely rare”. This aids diagnosis.

Hormones are molecules that act as signals from one type of cells to another. Most hormones reach their targets via the blood.

All multicellular organisms need “coordinating systems to regulate and integrate the function of differentiating cells.” Two mechanisms perform this function in higher animals: the nervous system and the endocrine system.

The problem occurs more commonly in the dog than in the cat. It is not very common in cats but is occurring more frequently.

Excess of cortisol in body.

Hypercortisolism: Excessive levels of cortisol in the blood result in Cushing’s syndrome.

“Cortisol is a corticosteroid hormone produced by the adrenal cortex (in the adrenal gland). It is a vital hormone that is often referred to as the “stress hormone” as it is involved in the response to stress. It increases blood pressure and blood sugar levels and has an immunosuppressive action. In pharmacology, the synthetic form of cortisol is referred to as hydrocortisone, and is used to treat allergies and inflammation as well as cortisol production deficiencies. When first introduced as a treatment for rheumatoid arthritis, it was referred to as “Compound E.”

What causes the production of excess cortisol in the adrenal glands?

{Caveat: research indicates some slight variations in the cause and treatment from one article source to the next, but the central arguments are common to all research sources}

The adrenal gland malfunctions due (in almost all cases) to either a pituitary brain tumor (85% of cases) or an adrenal gland tumor.

The underlying cause of Cushing’s disease also results in other conditions.

What are the symptoms?

Normally not all the symptoms are present. Normally 2-3 symptoms and sometimes none. Doesn’t cause obvious illness. Increased thirst may be the most obvious.

What is the treatment?

See your veterinarian. There are drugs including a new drug that can help normalize the production of cortisol but….

…..it is rarely life threatening and a near normal life can be expected. Cortisone excess caused by tumor is treated by surgical removal of both adrenal glands and daily cortisone replacement tablets2.

1. Please note: sometimes the apostrophe has been left out of the word “Cushings” deliberately. Don’t ask me why!