I’m a volunteer with Towncats in Santa Clara County, California. Mostly I do TNR and cover food and medical expenses for feral cats and their kittens. My trapping partner is Cynthia. We trap together, I transport, and she does aftercare.

Darryl is a tan and black spotted tabby (see attached pictures – to follow) about 2-3 years old. He looks like a small bobcat with his underslung jaw and naturally bobbed tail. Darryl had been neutered, vaccinated and microchipped at least a year before the feral colony feeder noticed that he had diarrhea. He was trapped by Cynthia, examined by a vet, and a fecal sample shown that he had giardia. His combo test was positive for feline leukemia and negative for FIV and heartworm. Cynthia housed him indoors in a two-tier cage while administering Flagyl and Panacur for almost six weeks. During that time Darryl proved to be an affectionate cat. He is now rid of the giardia. Only health problem has been gingivitis which reponded nicely to 10 days of antibiotics. 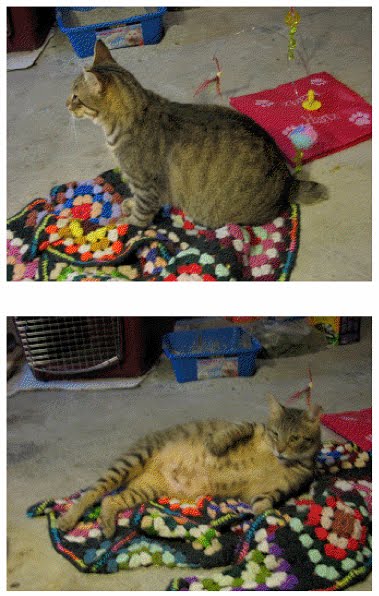 Unfortunately, his second combo test at the end of his treatment was also positive for feline leukemia.

At that point we could not return him to the colony and risk infecting other cats. He needed more room than Cynthia could provide and came to me in December 2010 for fostering. He is living in my garage since I have other house cats that I wanted to protect against FeLV.

Darryl is now ready for a permanent home. He would do better with another cat in the house than alone. He likes to wrestle and cuddle. His nails (he allows them to be trimmed)and teeth are used when he is overstimulated. He has learned that hands are not for biting, but you have to pay attention to his body language and stop petting before he takes your hand in his mouth.

He would make a great second cat if you have one that is also FeLV positive. Please consider giving Darryl a home.