My inspiration for this article was a comment by an American lady on a debate on one of the anti-declaw Facebook groups.

She was against declawing because she knew it was cruel major surgery but was using soft paws on her cat, so she obviously didn’t think he had the right or the need to be allowed to scratch.
Although we know soft paws are far better than having a cat declawed, I would never force our cats to wear such things which stop their natural and necessary behaviour of scratching.

Her comment showed the difference in her attitude to the comments made by UK members who advised ditching the soft paws and buying her cat a scratching post. 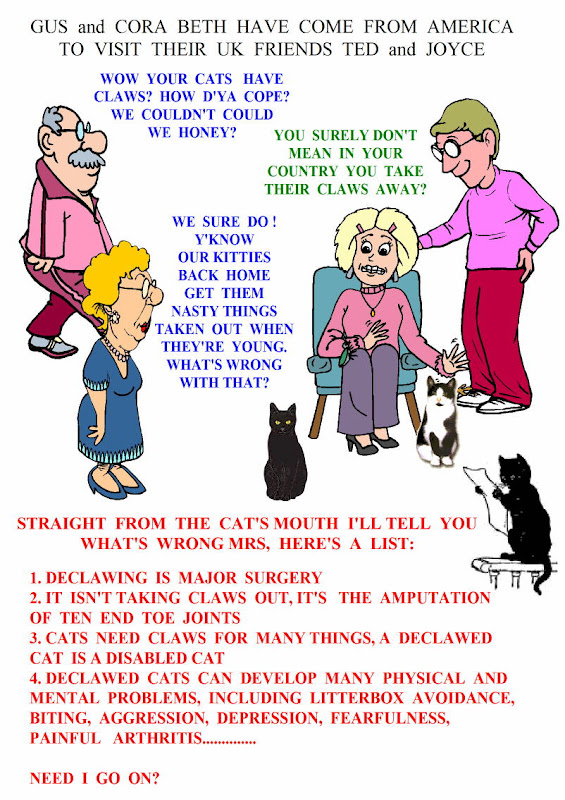 ‘Wouldn’t you think in these days of advanced veterinary science that someone would invent a way of taking only the cats claws without the last toe joint?’

So, for all she doesn’t think the amputation of the cat’s toe ends is acceptable she obviously thinks removing ‘only’ the claws would be!

We hear it time after time ‘I feel so guilty, I really thought it was only the claws, I wish I hadn’t had it done to my cat’

This is the attitude that I and every other UK person I’ve spoken to about it, can’t understand.

Would they get a puppy and when taking him for his inoculations or booking him in for neutering, if the vet suggested having his claws removed, agree without question?

Yet puppies claws can do damage too and they have to be trimmed and people accept that.

So if they don’t like cats to have the natural claws they are born with and can’t be bothered to buy a scratching post and teach the kitten to use it and take care of his own claws, why can’t they trim his claws just as they do their own, their children’s and their dogs?

It can only be because they don’t think a cat is important enough and it’s much easier to have him declawed instead.

Do American people not shudder when they think of cats claws being removed? It doesn’t seem that all of them do. Yet in the UK we are horrified at the very thought of even taking ‘only’ the claws from cats, let alone their toe ends.

A person who did that to their cat if it was legal here would get no sympathy for feeling guilty, we would feel all our sympathy for the poor disabled cat.

People really shouldn’t have a cat if they haven’t the time or patience or common sense to realise that cats come with claws because they are beautiful, perfect little tools that every cat needs and has the right to keep.