This is a real cat suffering from being front paw declawed. The paw pads on the declawed paws are dark, rough, irritated, mis-shapen and shrunken, unlike the paw pads in the clawed rear paws which are pink, plump, healthy, and oval,just they way they should be!

Paw pads are for cushioning, not for walking! This front declawed cat suffers from painful arthritis (he was relinquished to a shelter due to stress and litterbox issues). He sits back on his wrists because putting his full weight on his declawed paws is uncomfortable (he repositions himself often) and has taught himself to land on his hind legs when jumping from heights, to avoid the pain of landing on his front stumps, which are just like our fingers would be had we been robbed forever of their essential distal phalanx. 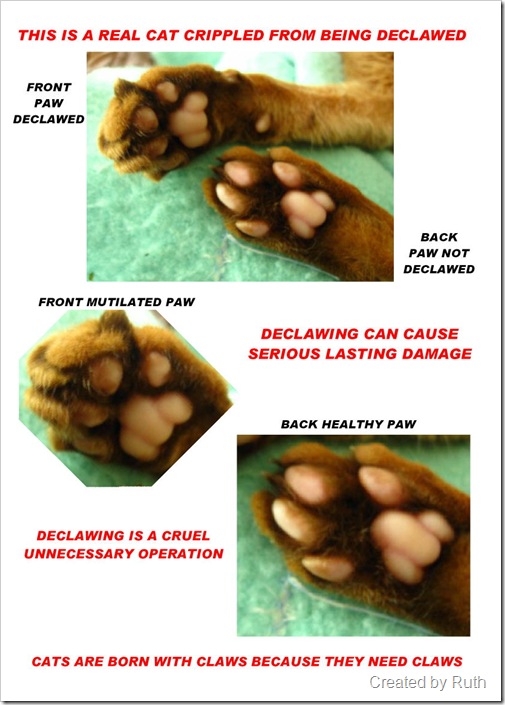 Although he still makes scratching motions, it appears to be more of a way to rub and soothe his severed joints. He licks and bites at them after trying to scratch, to the point of bleeding.

The possibility of this happening to a declawed cat, as well as other potential problems from declawing, such as biting, messing outside the litter box, stress illnesses (such as eczema or cystitis)etc, should surely convince anyone that declawing a cat is totally unacceptable.

Without the third phalynx to keep the the digital pad pulled forward in its normal position, the pad begins to regress and move backward, atrophying with disuse. The second phalynx, unable to be stretched now that the claw has been removed, will tighten into a hammer toe position. The cat will be forced to walk on the tip of the second phalynx, the hammer toe, without the protection of the digital pad. Very often the hammer toe will pop through the skin and the cat will have to live with chronic ulceration of the skin in what appears to be a pad, but is actually a callus.

De-clawed cats tend to walk abnormaly back on their heels rather than on their entire pads because of the chronic pain at the end of their severed fingers and toes. They often develop chronic arthritis and as the front toe pads shrink, chronic bone infections are common....The tendons that control the toe joints retract after surgery. These joints essentially becoming “frozen” The toes remain fully contracted for the life of the cat. In order to keep weight off the tender amputated toes, cats shift their weight backward, the altered gait stressing the limbs and spine, which could lead to arthritis later in life.

Why kittens are born with claws and why cats need them. Poster by Ruth - aka Kattaddorra.

Recently there was an article written boasting of the fact that some vets can declaw cats by removing 'only' the claws.

THIS IS TOTALLY UNTRUE.

There is NO WAY a cat can be declawed without the bone in which the claws are embedded being removed too.

I've heard that "non-declaw declaw" nonsense before. Not anatomically possible.

And from the guardian of the cat in the photo above:

As the article mentioned above, stated that the 'claw only' declawing is very expensive we can only assume the writer means laser declawing. But that writer is WRONG as laser declawing of course DOES amputate the bone too.

Many declaw vets are pushing this method as humane but in reality is it just as cruel and as disabling to the cat as any other method of declawing.

PLEASE don't be fooled, NO method of declawing a cat is acceptable. Don't risk your cats paws ending up like the paws of the poor cat in the photo above.