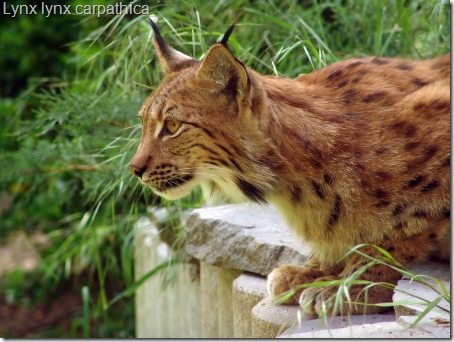 The picture above is of a subspecies of the Eurasian lynx: Lynx lynx carpathica or Lynx lynx lynx. This subspecies is found in: Mongolia, Northern China, Korea, Scandinavia, Central Europe, Eastern Europe and western Serbia, Caucasus and Siberia. (src: Wikipedia). The photo is by Joachim S. Müller

.The picture was taken in Magdeburg’s zoo, Germany.

The Eurasian lynx is also known as the:

In 1842, Edward Blyth made a description of the Eurasian lnyx as follows:

“In general, they are light made animals, with contracting flanks, and rather high on the limbs, and the fur of most of them is in winter long and very dense”

It is its dense fur which has caused its demise in the wild as people like it. Its tail is short and having what cat fanciers describe as “ear furnishings”, this cat might be mistaken for an American Bobcat but it is much larger with much bigger paws. The Eurasian lynx paws are very noticeably larger than average. The paws have plenty of fur to protect them from the cold snow and there is webbing in between the toes. Their legs are long but look thick perhaps because of the dense fur and the fact that they are muscular and powerful. In adapting itself for jumping the hind legs are longer than the fore legs.

The tail has a black tip and is about 1/6th of the head+body length. The tail has thick fur. The ears are large, wide at the base and have those startling tufts of hair on the tips. These ear furnishings are about 4-7 centimetres in length. In common with other wildcats the backs of the ears have a spot of lighter colour that is designed to be used when the cat is intimated. The ears become half flattened to communicate with the opponent the cat’s aggressive/defensive mood.

A description of the Eurasian lynx wouldn’t be complete without mentioning the famous ruff, the long hair that hangs from lower cheeks. This is very particular to the lynx. The face has a flat appearance.

The fur is long, silky and dense. The back has the most dense fur. Unfortunately, the fur of young lynx is particularly suitable, people think, for the making of garments especially the light coloured underbelly fur. In summer the Eurasian lynx moults to shorter and sparser fur. The under-parts generally are usually white. 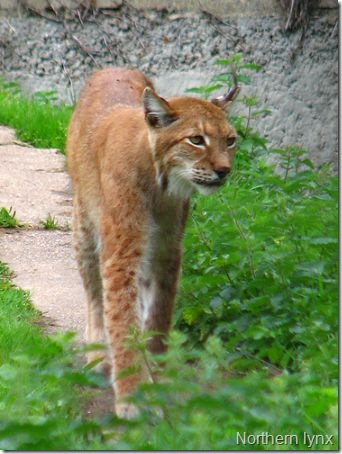 As mentioned in the main article on the Eurasian lynx, there is a wide range of ground colours, patterns and length of fur. The coat is a tabby 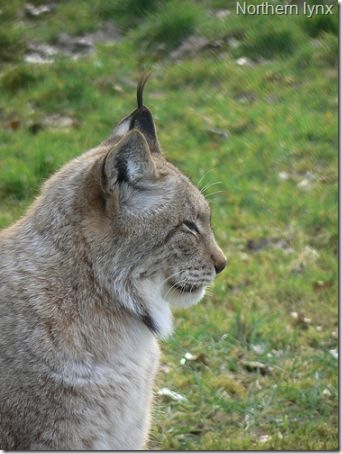 Recorded weights are as follows:

Description of the Eurasian lynx – Photos are published under a Attribution-NonCommercial-NoDerivs creative commons License — this site is for charitable purposes in funding cat rescue.