↓
Home→Uncategorized→Dirk: No Dumpsters for this Beautiful Boy

Dirk: No Dumpsters for this Beautiful Boy 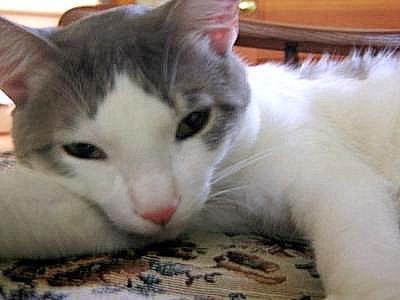 Baby Dirk getting in trouble 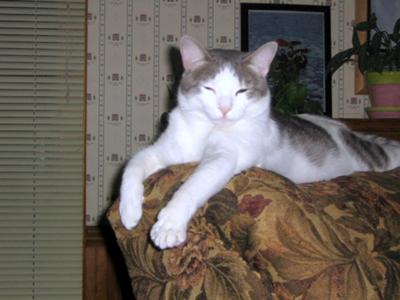 I got Dirk in LA a little over 2 years ago, a little boy had him on a bus, and Dirk was about 4 weeks old.

The boy told us he was going to throw the kitten in a dumpster, but I convinced him to give him to me!

We were attached from the moment I held him. He was covered in fleas and had an eye infection, but now he's as healthy as can be!

He sleeps on my chest, or right across my face. He has a very loud purr, but will only sit in your lap when it's on his terms.

He also is very curious, and opens up cupboards, doors, drawers, and anything else he can get into.

He also likes to be way up high, on top of the fridge or somewhere else above all where he can see what's going on.

He likes to follow me around, he definitely chose me to be his mama. He doesn't really go up to a lot of other people, he's pretty shy with everyone except me. I can't imagine my life without Dirk now.

He has a beautiful face with wide eyes, and a gorgeous coat, mostly white, but with some grey tiger patches, spots and markings on his head, back, and tail.

I hope you find him as beautiful as I do. He now lives in Vermont with me and his two younger brothers and absolutely loves it. He's very smart, and talks back and forth with me constantly.

He will always be my baby.

Hi Marla.. I do find Dirk as beautiful as you do. He is handsome and he looks confident and content. A bit cheeky almost.

And I love your love for him. So tender and committed and unconditional.

Thanks for sharing Marla.