↓
Home→Animal Rescue→rescue cat→Discussion: Will your cats be euthanized when you die so you can be buried together?

Note from Elisa: This article was originally posted July 2, 2017. Since the stresses of being a veterinarian article had so much response from veterinarians, I wanted to publish it so it can be considered as one issue veterinarians may face, as many cat owners plan to have their cats euthanized at the time of their death so they can be buried together.

Take a look at this sweet face. This beautiful cat, up for adoption in the Myrtle Beach, South Carolina area, sparked some thought-provoking comments several days ago when cat rescuer Daren Watson posted this sweetheart on Facebook. (Since this is an old post this cat most likely has gone to a forever home so this article doesn’t need sharing for that reason) 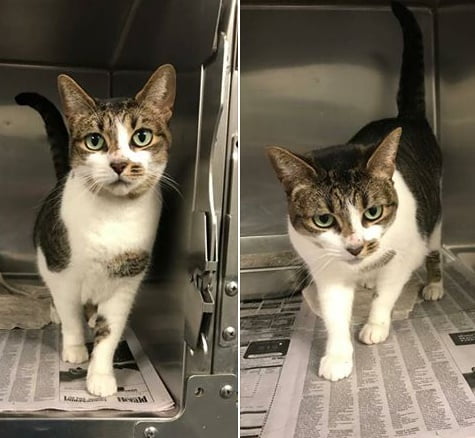 Myrtle Beach cat was the inspiration for this article

“People you need to put in writing and in your will exactly what you want doing with your pets when you die. Do not trust your family to do the right thing. This four-year-old declawed and spayed female is now on death row. The owner’s children cannot be bothered with the thing their mother loved the most they are too busy Scavenging the house to take care of her cat. Don’t let this be a death sentence for this poor cat period if you know anyone looking for a declawed cat here she is I will get her out if you can commit to her. Myrtle Beach South Carolina area 843 455 6199.”

The post started a conversation on what cat owners have planned for their cats when the owner dies. Some have plans put in place to care for their cats. But many, many owners plan to have their cats euthanized (killed) so they can have the ashes buried with them. Those being cremated want the ashes mixed before scattering and one cat owner wants the mingled ashes to be used in the planting of a tree.

The argument is the cat could face a fate worse than death when the owner passes away. There are worse things than a cat being put down for this type of thing, especially if the owner has no one they can trust to carry out their final wishes.

The thought of a beloved cat being taken to a shelter or being kicked out by a family member who just doesn’t want to honor what the person wanted for their cat, should the inevitable happen, is just too much to bear.

I’m going to end this article here and let the discussion begin. Do you agree with this logic? Please sound off in the comments.

Anyone who wishes to adopt this beautiful cat in the article photo should contact Daren. She pulled this poor girl from a high-kill Myrtle Beach shelter and a new home is needed.

I apologize for using the term “killed” but euthanasia is putting a cat out of it’s misery for health issues. These cats may still be healthy when they join their owner in death.