Mind control - the sweet look works - the other doesn't

Hi everybody! It's Furby again! Me and mama are having a major difference of opinion. She told me I'm as stubborn as a teenager. Is that bad? Anyway, I'm going to be a nice kitty and let mama go first and then I'm going to tell you the REAL story.

There's no way mama can win this one. I'm a cat so I should know. The story is "Do Cats Control Humans?" I know we can and mama agrees with me. It's how we do it that we're having this little disagreement on. All the cats in the world are gonna be mad at me but the research is wrong and I'm a snitch that can't keep a secret. Mama-you tell your side first. Then we'll let everyone vote and see who wins. 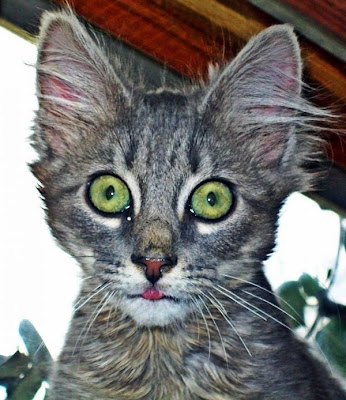 JOYCE
I've done a lot of research on cats since Furby came into my life. I've learned a lot. Most of it on how to physically care for him so he'll stay healthy enough to outlive me. One thing I couldn't understand is how he can sit on the arm of the couch and the next thing I know I'm holding him for his nap. Or, I'm in the kitchen preparing a snack for him. Is he using mind control? What gives? So I did some research.

Dr. Karen McComb is an expert, lecturer and a reader of animal psychology. She conducted a study for the University of Sussex based on the actions of her cat Pepo. She specializes in acoustic analysis and playback. The results were published in the July 14th issue of the journal Current Biology. McComb was convinced her cat could vocalize the need for food in the same manner a baby cries when hungry.

Karen and her team trained cat owners to record the cries of their cats when hungry and played back the results of 10 cats to a test group of 50 volunteers. The cries had to be recorded under normal home conditions because cats do not vocalize on command around strangers. No big surprise on that one.

The cries were played back and the experiment concluded that a cat's cry was interpreted in much the same manner as the cry of a baby. Even those test subjects who didn't own cats were mentally affected the same way cat owners were. A cat can demonstrate the need for food thru a purr.

While a cat's purr usually suggests contentment and happiness, there is a higher pitched purr or meow that means "feed me." A cat can cause its vocal folds to vibrate at different frequencies determined by how much energy the cat wants to put out. The cry ranges from a low level of purring to producing a high pitched meowing and is a sound research has determined similar to a baby crying. The cat determines how convincing the purr or meow should be based on the individual owners tolerance level. In layman's terms the cat wants to be heard and fed but not be kicked out of the room for being too vocal.

This experiment concluded that cats control humans by using their vocal cords.

That's a bunch of catnip if you ask me. Mama, have you been into my catnip again? I don't tell you what I want by PURRING! You need to remember when you found me and took me to my forever home I didn't know how to purr. I didn't know how to meow either. I learned to hiss really fast because you almost stepped on my tail every time I went for a drink of water. I purr almost all the time now but that's NOT the way for a cat to train a human.

Haven't you noticed what happens every time I sit on the arm of the couch? You do what I want because the secret is in my eyes. It doesn't matter whether I want a nap or food or be petted. All I have to do is get your attention (which is easy since I'm the CUTEST pet in the house) and look deep into your eyes. You will do my every wish. You will feed me whatever I want. And last but not least-you will think it was all your idea.

I've had my cat roomy Lola under my control (kinda-sorta) and the dog critters know I'm the boss and now you know. I'd like to say I'm sorry to all of the cats out there. Look at it this way. If you've had bad luck using the purr vibration method you can use mind control my way. Remember-it's in the eyes.

From Do Cats Control Humans? to Cat News