I’m referring to domestic cats. I’m sure that a lot of cat lovers will immediately respond by saying, yes, because they know that cats feel emotions. It’s a given that cats have emotions but it is the range of emotions that people cannot agree on. A 2008 survey of British cat owners tell us that almost all of them believe that their cat can feel affection, joy and fear. However, about a quarter of the owners surveyed thought that their cat was incapable of feeling anxiety or sadness (cats clearly feel anxiety by the way – see below). It does mean, however, that three quarters do believe that cats feel sadness. 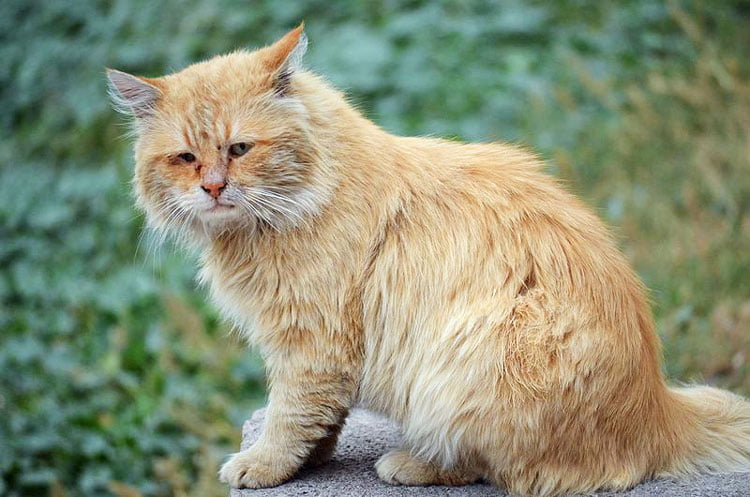 Described by the photographer as a “A sad cat in Ulus, Ankara Turkey”. This is an outdoor, community cat but he does look sad. Photographer: Atasoy.emrah

There is an old adage, “Curiosity killed the cat”. I think we all know it. We believe that it means that because a cat is curious they end up in dangerous circumstances which eventually kills them. I understand that. However the original version of this proverb which emerged in the 16th century was “Care killed the cat”. In this instance the word “care” meant to worry, to fret and to be anxious about something. The idea was that cats could become so anxious that they could even die from it.

We know that cats can become anxious. I don’t think there’s any doubt about it. They demonstrate it often in the home such as when there’s a strange noise outside or a stranger in the house. Anxiety is linked to depression while sadness is a form of depression.

I would like to suggest that because domestic cats can be anxious they can also be sad. Therefore cats can feel sadness. I’d also like to refer to Dr Bruce Fogle the well-known veterinarian and author who writes about sadness or depression in the hospital environment (Complete Cat Care). Of course he sees cats in hospitals where they are separated from their home environment. He refers to them as sad hospital cats. He says that they don’t show any particular fear, anger or worry but they don’t eat or respond to play activity. And once they return home the sadness disappears quickly and their appetite returns as does their activity levels.

There is difficulty in getting to the bottom of the range of emotions that domestic cats feel because we can only do it through observation. We can’t interview them as you would a person. It is certain that cats have a range of at least basic emotions. It is the more complicated higher emotions which are the subject of debate but I will argue that cats can feel sadness even depression.