Yes, cats can get sinusitis. Domestic cats have two frontal and two sphenoid sinuses. The small sphenoid sinuses are named after the sphenoid bone which is located in the middle of the skull towards the front. The frontal sinuses can become infected with bacteria following an upper respiratory viral infection (URI). Sinusitis is referred to as a secondary bacterial infection.

I am not a veterinarian but the symptoms are well know to humans. They are similar for cats: a nasal discharge often from one nostril combined with sneezing and sniffing. It can cause a headache or general discomfort in the face. Headaches are hard to diagnose in cats but a cat with a headache may sit with their eyes partly closed and with their head hanging. Sometimes cats press their heads against a hard object to alleviate headaches.

Sinusitis can also cause a depressed appetite with consequential weight loss. Other causes of a cat frontal sinus infection are fungal infections (uncommonly) and an abscessed root of a top premolar tooth. Feline fungal infections (cryptococcosis) can be caused by the dust from pigeon excreta blowing into a cat. A vet will confirm sinusitis with an X-ray.

A vet will treat the condition with antibiotics which is exactly what a doctor would prescribe for human sinusitis. Sometimes surgery may be advised if the antibiotics are unsuccessful. Please talk to a vet about it. I am simply answering a question that cat owners ask of Google.

Some pages on URIs

What antibiotics are used for upper respiratory infections in cats?

The question in the title incorrectly presupposes that the cat has a secondary bacterial infection. The question is jumping the ...
Read More

Can cats get colds?

Yes, cats can get colds but the viruses that causes them are different to those that cause the human cold ...
Read More

How to build a nebulizer: helping a kitty with an upper respiratory condition to breathe

Watching a beloved cat agonizing from an upper respiratory condition; a kitty who is deeply congested and struggling to take ...
Read More 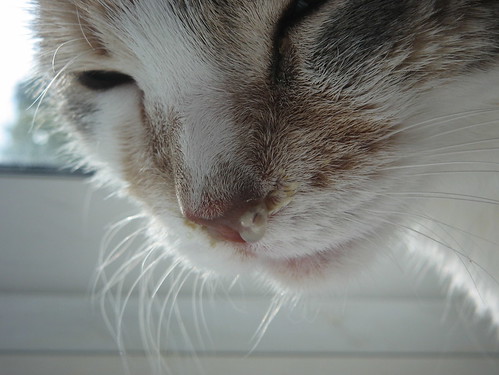 My cat has an upper respiratory infection and loss of appetite, please help

by Tracey (England) Hi, I have a 12yr old male cat who has just spent 2 nights at the vets ...
Read More