I'd like to begin this story in an unorthodox manner and tell you about 2 white mice.

They were my pets and shared a cage, water bottle and feed tray. Each morning I would put food in the tray and one of the mice would bring a piece of food back to the other. I don't know if they took turns doing this because they were identical. I thought it sweet how one would see to the needs of the other. To me this shows that even the smallest of creatures can show love to each other. I watched this routine for months. When one of the mice died the other lived only a few days and it also died.

I've always believed cats love each other. I photographed many of my cats in hugging poses. At my "cat lady" peak I had 6 cats at one time. Most were ferals that were tame enough to come inside for food. I would feed them in the kitchen where they would eat and go back outside. Occasionally I would find a few of them curled together on my bed. Sadly most of my pictures were destroyed in a fire about 8 years ago when my office burned down. 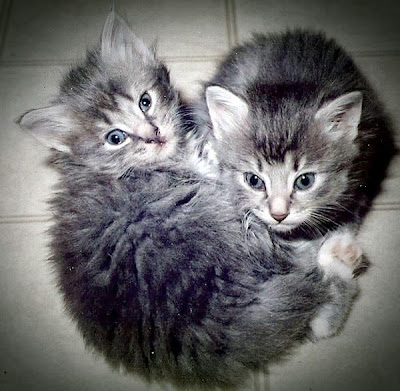 Cats have a totally different way than dogs of showing affection both to other cats and humans. First keep in mind that a cat is not a dog. Whereas a dog tries to please its master, a cat believes it IS the master and we are the servants. Affection is shown to humans and other cats by allorubbing (exchanging scents). So anytime a cat rubs sniffs or bumps noses with a human or another cat it is showing both affection and clansmanship.

There is a lot of conflicting information on the internet debating whether cats love each other. Researchers are in agreement on lions. A male lion will help raise his offspring and that fact has been proven. However many scientific studies are in denial that house cats feel human emotions such as love and tenderness. The problem with these research projects is the laboratory setting. Cats under stress and kept in a small cage are not going to express love any more than humans would under those circumstances.

Those who study house cats in their natural home environment found that cats love, cry and experience grief and anxiety in much the same way as humans. When a cat brings a small dead animal and places it at your feet that is also a sign of love. The cat is trying to care for it's human by providing food in much the same way it would feed its offspring. If another cat or person suddenly goes out of the cats life the cat may grieve. 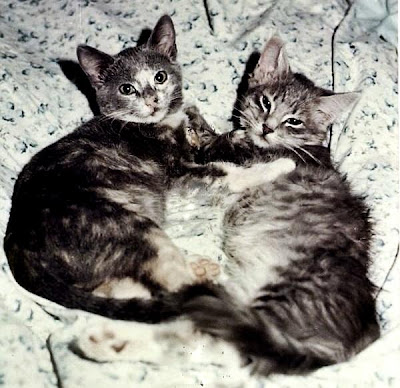 Pharmaceutical companies are studying cats and making groundbreaking discoveries in the emotions of cats. They are finding that many of the drugs used to treat depression in humans may be beneficial to cats. Neurotransmitters (dopamine, seretonin) studies show similarities between people and cats and enforce the belief that cats experience love, fear, embarrassment and many other human emotions.

Mother cats will search and meow for kittens who have been taken away from her. I had a mother cat pass away suddenly and a 3 month old kitten she had "adopted" searched for her for hours. It was pitiful. Normally I will show a dead cat to the rest of the cat family so they know the cat is gone. On this occasion I was in the middle of moving from one town to another and couldn't do this. I've found most cats are intelligent enough to realize one of their own has died. They may cry real tears and have nightmares. More on this subject can be found at http://www.messybeast.com/cat-grief.htm 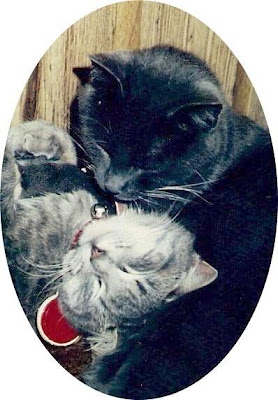 There has also been confirmed feral cat research that shows there may be several mother cats raising kittens at the same time in a feral colony. Sometimes the tomcat helps with the kittens and sometimes he doesn't. The individual personality of the male determines whether he is involved.

I have experienced this feral colony daycare firsthand and would like to share this story with you.

My feral cats Snuggles and her sister Boo were expecting kittens at around the same time. It was winter and I brought them inside. It had taken me months to earn their trust enough to coax them in. It was a nightmare of a day that started out bad and ended with a rare blessing. I'll never forget it.

Boo went into labor first. I've assisted in many deliveries and after a few hours I realized something was very wrong. I placed Boo in her carrier and rushed her to the vet. It was early in the day and I was the first patient at the vet. He examined Boo and had to do a c-section on her immediately. The kittens didn't make it and I was allowed to take my poor motherless cat home later that day.

When I returned home I found Snuggles in full labor. She had already delivered 2 of her 9 kittens. NINE! All I could think was "how in the world is she going to feed that many." The answer was Boo. She stretched herself out next to her sister and didn't move away when several of the kittens found her and began nursing. I've had experience with c-section mother cats nursing their young and had no problem with this provided it was OK with Boo and Snuggles.

Once all the kittens were cleaned up and snuggled together, my indoor cat Smokie politely walked over to the kittens and claimed one for herself. Smokie had been spayed when she was younger and I don't know if she was jealous or helping. She got along well with the ferals and there was no problem with them over her taking the kitten. The problem is where she wanted to take it. She jumped on a kitchen chair and snuggled in with her new baby.

I let her know that wasn't acceptable and took the kitten back to the mother/aunt. I didn't want it either falling off of the chair or missing a meal because it was away from the others. Smokie followed me back to the kittens and stretched out with the 2 other mothers.

I kept the kittens inside but the mother(s) were allowed to go out when they wanted. I made a tape recording of the kittens meowing and I'd go outside and play it if the cat was needed. There was always one cat with the babies at all times.

I used to have a picture of the 3 female cats and the 9 kittens. The adult cats formed a corral and trapped the kittens between them. All of the babies lived and I found good homes for them So everything worked out for the best.

Do any of you have cats in love with each other? I'd really love to know.

Do Cats Love to Cat News