You won’t find much in the reference books or on the Internet about why domestic cats yawn but I think they essentially yawn for the same reasons that humans yawn with some modifications.

I think we have to rely on our own observations as to when domestic cats yawn. And we can rely on some research as to why they yawn. I’m also going to refer to research on why humans yawn because I think it’s the same reason more or less.

I do not see my cat yawning when he is tired and ready to retire for the night. Actually he doesn’t retire for the night as he is typically more active at night but he goes to sleep in the morning when I’m having breakfast. He does not yawn at that time. I am sure of it. However, he nearly always yawns when he gets up from a snooze or a full-blown sleep. 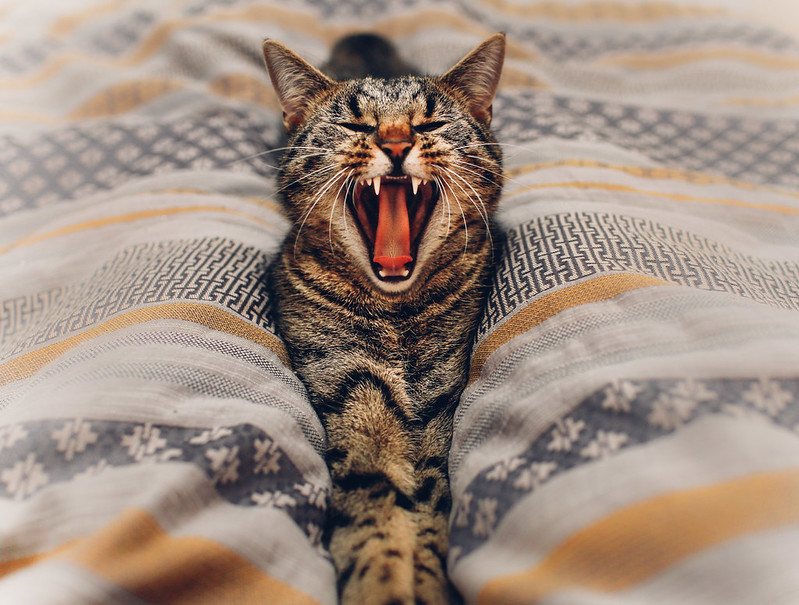 The picture is by me of my cat yawning as he is about to get up from the bed where he was settled between my legs. When he wakes up he will yawn when reclined and then he will get up and stretch himself. He may then go outside almost immediately. That’s the sequence of events. Under these circumstances I have to conclude that he is yawning to wake himself up. Or it is part of the waking up process. It is a means to help him wake up and become active which squares up with the reasons why humans yawn. This particular action helps the lungs and tissues to stretch and allows the body to flex its muscles and joints. It may also force blood towards the face and brain to increase alertness.

When we yawn we also stretch our bodies when we do it as part of the process of waking up. Yawning is integrated into this process for both humans and cats. But in answer to the question in the title, cats don’t yawn when they are tired in my opinion, although I would welcome the opinion of readers in a comment.

Another reason why humans yawn might be because it helps to regulate the brain’s temperature. Yawning incorporates inhaling air which helps to cool the brain down. This is what a research study decided in 2014 published on the journal: Physiology and Behavior.

As people yawn when they are bored this might be because when a person is understimulated their brain slows down causing it to drop in temperature so yawning raises the temperature again. It’s not clear whether domestic cats yawn because they are bored. I don’t believe they do. I can easily tell when researching this topic that there is a dearth of information on it which means that the best experts don’t know why cats yawn other than they probably yawn for the same reason that humans do with perhaps some modifications.

The anatomy of both cats and humans is very similar which would help to support this analysis.

Is yawning contagious among cats?

Yawning is contagious amongst people and it can be contagious interspecies; so for example if a person yawns they can make an elephant yawn surprising as it may seem. Also dogs can catch a yawn from humans as can primates.

The photograph in this section of the article of a mother yawning together with her kitten hints at the possibility that yawns are contagious between domestic cats. It would appear that the kitten has followed their mother yawning. Alternatively it may be the case that they simply woke up from a snooze at the same time and are therefore yawning at the same time.