Do pumas eat penguins? It is an interesting but slightly strange question as pumas don’t frequent the sea shore. It is just possible that pumas do eat penguins but the data that I have from the best source on the wild cat species1 including copious research on the contents of puma scats (droppings) in South America tells me that no penguin remains were found in them. Therefore it is unlikely that there is actual evidence that pumas eat penguins or at least I can’t find it.

See update at base of page. Yes, puma’s do eat penguins in Southern Patagonia! But it is obviously rare. There you go… 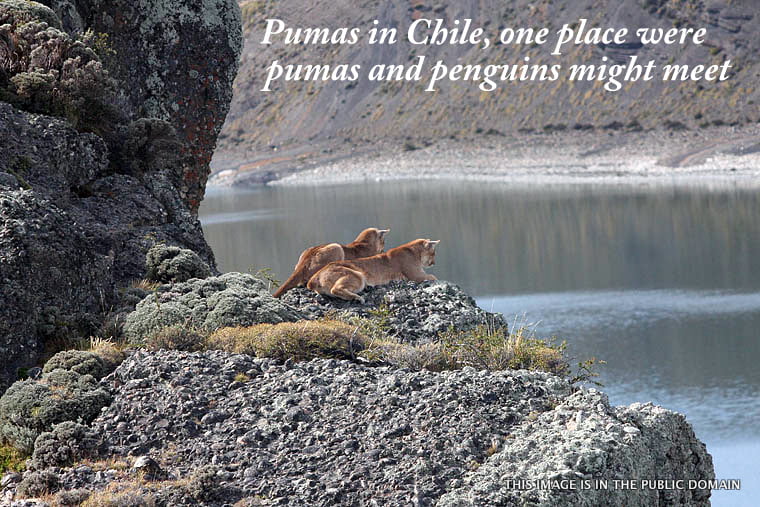 It is a challenging question because it begs another question; whether the puma range overlaps with the range of the penguin. There has to be an overlap. It may happen in Peru where the puma’s range appears to go to the sea shore (just). Penguins live on the sea shore as they eat marine life such as krill.

If we say that there may be a relatively small overlap of distribution of these species, they may meet and if so the penguin would become a prey item for the puma because they are opportunist hunters. However, if it occurs it must be very rare because, as mentioned, there are no puma scat remains recording penguins as prey (that I can find).

Also, pumas in Chile – a country where there may also could be an overlap of distribution – hunt in areas where there is greater than average shrub or tree cover i.e. they don’t hunt on the sea shore!

It would be very strange to see a puma on the rocks or beach hunting penguins. I wonder if it has ever happened or if the question “Do pumas eat penguins?” is genuine or just a speculative joke of some sort. It is that unlikely. My guess is that a pumas might find himself on the beach. In which case they just might prey on a penguin is one was available on that rare day.

Pumas in Chile eat hares, rodents, birds, livestock and unidentified mammals. Pumas eat prey from the size of mice to moose – a massive spectrum of prey animals. Penguins world tells us that the Magellanic penguin (Spheniscus magellanicus) can be preyed upon by the puma.

I can’t find any photos of pumas and penguins together! Nada. Zip.

Gonzalo B’s comment reads: “In Monte Leon National Park is the first report of Pumas eating penguins…” He refers to a study: The ecological role of native and introduced species in the diet of the puma Puma concolor in southern Patagonia and that’s abstract begins: