Periodontitis appears to be more common in Siamese cats and the family of breeds associated with the Siamese e.g. the Oriental Shorthair. And increased susceptibility also occurs among cats who have repeated viral respiratory infections.

Periodontitis progresses from gingivitis and is an infection of the teeth and gums. The supporting structures of the teeth are damaged or destroyed.

Gingivitis is the build up of dental calculus (tartar) along the boundary between the teeth and the gums. This forces the gums away from the teeth where bacteria and food is trapped in pockets. Gums become inflamed and infected.

Tartar is a mixture of calcium phosphate and carbonate with organic material. Tartar is hardened plaque. Plaque is a soft colourless substance consisting of food particles and organic matter together with living bacteria. When first deposited it is yellow-brown in colour and soft.

The treatment for periodontitis is performed by a veterinarian under a general aesthetic. It means thoroughly cleaning the mouth, which includes: removing the tartar, draining the infected gums of pus, extracting damaged teeth, and polishing the remaining teeth. Antibiotics are prescribed to kill off the bacteria infection. The vet will advise on good home care.

People don’t try and explain why Siamese cats appear to be predisposed to ‘bad teeth’. I have always contended that it is due to less than good breeding practices. I have even stated that the most unhealthy cat breed is the Siamese cat for the simply reason that this breed has the longest list of inherited diseases of all the breeds.

I argue that the breeders, in their relentless quest for an elegant appearance as they regard it, have overlooked health. ‘Elegance’ is an aesthetic and subjective concept and many people disagree with the breeders and believe that the extreme bred Siamese is odd looking with a rat-like face. It cannot be denied that the appearance is unnatural. Who is to blame? The Cat Fanciers’ Association is the answer as they set the breed standard; the guideline for appearance which must be followed by breeders if they are to compete at cat shows. Winning at cat shows promotes the breeding cattery which improves business.

There are many variants of the Siamese cat. The applehead Siamese is completely different. Then there are Thai cats. These are also Siamese cats but more genuine in appearance. I don’t know of a study which compares the health of the various types of Siamese cat.

My thanks to the Cat Owner’s Home Veterinary Handbook for prompting me when writing this.

The title describes disorders that produce degenerative changes in the central nervous system. They are determined by inherited genes. In ...
Read More

As this is an imprecise science I don't believe that you can provide a confident answer to a question about ...
Read More

Why do Siamese cats vomit so much?

It is a good question and there may be five possible health reasons why Siamese cats might vomit so much ...
Read More

Do Siamese cats have sensitive stomachs?

People ask if Siamese cats have sensitive stomachs. My first impression is that this is a complicated question. Even the ...
Read More

Question: I am having trouble finding info about black eye color in Siamese cats. One of my Siamese cats has ...
Read More

Is it possible that Cesarean births of kittens are responsible for immune related and undefined health problems in pedigree, purebred ...
Read More 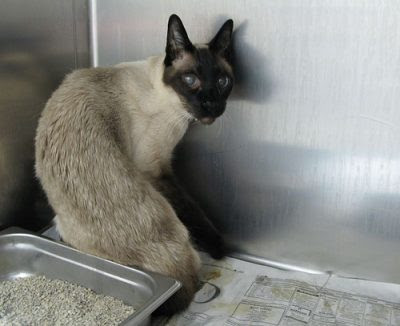 The Siamese cat has the most inherited illnesses of all the cat breeds and the breeding of the modern Siamese ...
Read More
Please comment here using either Facebook or WordPress (when available).