Domestic cats (and all wild cats bar the cheetah) are known for their retractable claws. All the experts say it online but I disagree with them. To describe the claws as retractile or retractable misleads the way the tendons and muscles work.

Cat claws are protrusible. This cat is a puma and his/her claws are magnificent. Photo in the public domain in my view.

The default position or position of rest for a domestic cat’s claws is retracted, which lifts them off the ground to a large extent.

The cat has to make a positive decision to extend the claws so that they become visible and start fully functioning. In a strict sense this means the claws are protrusible or protractile not retractile or retractable.

The difference between protractile and retractile is important in this instance. If the claws were retractable the cat would have to take positive steps and use his muscles to retract his claws for hours on end. This would be impractical and a waste of energy as the claws are normal tucked away. They are used for emergencies, stretching and when scratching, for instance.

Because the claws are retracted when at rest they maintain their sharpness like a sword in a scabbard. Cat owners know this when scratched. It seems to me that in the rest position the muscle pulls on the tendon which retracts the claw. No effort is needed.

The claws of indoor/outdoor cats are usually less sharp on the forepaws because they are used often and come into contact with the ground and other objects frequently. As a result they become slightly blunted or simply slightly less sharp. Indoor cats rest more which means there is less opportunity for the forepaws in particular to be blunted by day-to-day use.

It is worse for elderly cats. Their claws can grow too long and into their paw pads causing harm and pain. Cat guardians need to inspect the paw pads of elderly cats regularly and trim them when necessary.

SOME MORE ON CAT CLAWS:

Do kittens need their nails clipped?

Yes, kittens need their nails clipped so they can get used to it. This makes it much easier when they ...
Read More

How did this cat get a claw in her eye?

NEWS/OPINION-COVENTRY, UK: Coventry veterinarian Simon Pudsey had never seen it before he said; a one-year-old cat with an 'entire' claw ...
Read More

Why do cats have a dewclaw?

The dewclaw is attached to the fifth digit of the forepaws of cats. Normally this digit is high up and ...
Read More 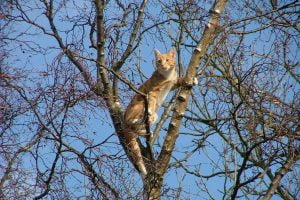 Cats, like humans, don't naturally go into reverse. They don't like walking backwards. They may do so for a short ...
Read More

A black kitten with very nicely developed claws. Why kittens are born with claws and why cats need them #IfCatsRanTwitter ...
Read More

Should Cat Claws Be Trimmed?

People ask whether they should trim their cat's claws. The first point to make in answering the question is that, ...
Read More

Can Cats Get Ingrown Nails?

Yes, cats can very definitely get ingrown nails. Pretty much all you can do is to (a) remove that part ...
Read More
Please comment here using either Facebook or WordPress (when available).